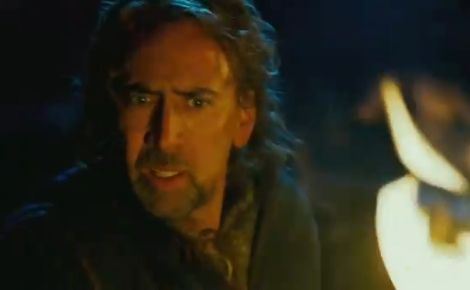 After kick-ass, Bad Lieutenant and to a lesser extent The Sorcerer’s Apprentice, Nicolas Cage has had a pretty decent 12 months. But this nonsensical medieval thriller dredges up unwanted memories of the Wicker Man remake.

Reuniting Cage with his Gone In Sixty Seconds director Dominic Sena, this limping 14th century odyssey sees Cage and Ron Perlman play Behman and Felson, two knights entrusted to transport a suspected witch (Claire Foy) to a remote abbey. There, monks will perform a ritual upon her in the hope of ridding the land of the Black plague.

Accompanying them are a posse of pals, including Stephen Graham’s “spineless scoundrel” (sounding bizarrely like Woody Allen) and Misfits star Robert Sheehan as an altar boy with dreams of becoming a knight.

Obstacles include CGI wolves (they look crap) and a rickety bridge straight out of the Temple Of Doom playbook, in what proves the film’s only truly decent set-piece.

The story hinges on whether Foy’s character is a witch or not. And, to be fair, the actress (best known for playing the lead in the 2008 BBC version of Little Dorrit), gives a spirited turn, investing far more energy into her underwritten role than it merits.

Cage and Perlman – Ghost rider and Hellboy, together at last! – make a solid enough double act and there’s even a chance for Christopher Lee to ham it up in a brief cameo.

Problem is, aside from the great Halloween make-up – just about every extra is covered in boils, warts and pustules – Season Of The Witch is often about as much fun as dysentery.

At best – or worst – such missteps nudge it into camp B-movie territory. But elsewhere it takes itself too seriously. Maybe if they’d thrown in some bees and a bear costume…