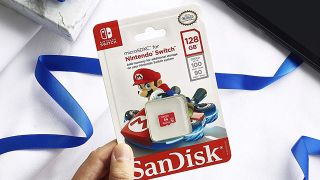 Running out of room on your Nintendo Switch? We hear you, boo. Amazon’s swooping in to save the day with a price-cut on the official, mushroom-emblazoned 128GB SanDisk MicroSD card. It’s now just £17.99 instead of £41 in the UK and $24.94 instead of $34 in the US, which is obviously great value for money (and the first of many Amazon Prime Day game deals to look out for in the coming weeks). You’re saving 56% in the UK and 29% in the US, getting you what is comfortably one of the best Nintendo Switch accessories around. However, this bargain’s only going to last for today so you better get a move on if you want to make the most of it. Because Nintendo products tend to hold their value - in other words, they’re a bit pricey - it isn’t an opportunity to be missed.

(UK) 128GB Officially Licensed SanDisk MicroSD Card | £17.99 on Amazon (save 56%)
This officially licensed Nintendo Switch SD card will give your console a much-needed boost to its memory.View Deal

(US) 128GB Officially Licensed SanDisk MicroSD Card | $24.94 on Amazon (save 29%)
You can also get in on the action via Amazon if you in the US; the American version of the site has slashed its price too.View Deal

If you’ve got a Nintendo Switch then you’ll know that its storage… well, it leaves something to be desired. You only get a meagre 32GB of internal memory out of the box, and that’s not going to be enough in the long run (games take up a lot of space these days, particularly with post-release updates and DLC). That’s where Nintendo Switch SD cards like this one come in. They add to your system’s storage and make sure you don’t have to delete an old save to make room again.

While we’re on the subject of discounts, don’t miss our guide to cheap Nintendo game deals. Although it includes reductions on everything from Mario Kart 8 Deluxe to Super Mario Maker 2, you’ll also find Nintendo Switch Online cheap and tips on grabbing a Nintendo Switch controller cheap.