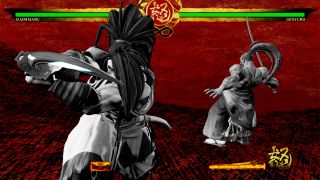 Here we go. It's been a full decade since Samurai Shodown last appeared on PlayStation, and now SNK is bringing it back in style. Admittedly, a lot has changed since Samurai Shodown Anthology – a collection of the first six games in the series, from its debut on Neo Geo up to the release of the PlayStation 2's Tale of the World's Greatest Swordsman – landed, fighting games have evolved and times have changed.

That's why SNK is taking this opportunity to reinvent the weapons-based fighter with a healthy dose of style and swagger, bringing the cult fighting game into a position where it can stand toe-to-toe with the likes of Street Fighter 5 and Mortal Kombat 11.

Just like Capcom’s Street Fighter 5, Samurai Shodown is a 3D fighter played on a 2D plane. It’s a setup that delivers the classic stick-twizzling combos of old, but gives the dev room to – on occasion – literally send the visuals soaring, as super special attacks break loose, zooming, panning, and spinning out in elaborate animated cinematics.

When seen in action, this reboot is just what’s needed from a game that has been on ice for 10 years. It features a roster of classic characters who long-time fans will be eager to get their hands on, while  three new faces will be joining the mix for some much needed freshness. It’s an approach that has put pressure on the team, some of whom worked at SNK in the 90s, to meet exceedingly high expectations.

The first thing we notice picking up the pad is how this feels like Samurai Shodown from the sweaty arcades of the ’90s. There’s a weight and pace to the tit-for-tat weapon-based brawling that gets the nostalgia gears grinding; heavy hits land in a three-step delayed stuttering fashion to emphasise these sword swipes and hurled chain-hooks are doing enormous damage. “We’ve put a lot of work into getting the hits very clean and heavy,” says art director Nobuyuki Kuroki, who worked on the original arcade game.

The faithfulness to the original fighter – released back in 1993 – means the game initially takes some getting used to, as some characters can demolish your health meter in two or three well-timed hits. This one-hit, high-damage setup ensures this reboot, like the original, plays like no other fighting game currently on the market.

Rounds often begin with you wanting to launch flurries of combos, but as your health is chopped off, both you and your opponent break away and enter a samurai stare-down state where no-one wants to attack. Knowing you’re potentially always one counter or heavy hit away from losing a bout lends Samurai Shodown a rare, anxiety-baiting quality. This can be tempered by using the new Lightning Blade, a one-time attack that depletes around two-thirds of a character’s health. It’s a move of last resort, and can be blocked or side-stepped on u; a lifeline that should be used sparingly.

Other than this, SNK isn’t adding too many new features to Samurai Shodown, instead relying heavily on the game’s backbone of combos, counters, and special attacks to appeal to new and old sword-hands alike. There’s an element of strategy to when and how you use the Rage Gauge, which builds as you land hits, and enables access to more powerful attacks. But it’s the core returning ideas that still stand out; disarming opponents with timed counters, deflecting strikes, side-stepping into combos, grapples that set up opponents for a brutal flurry… Samurai Shodown is sharpening the blades it has, not forging a whole new set.

Everything you need to know

That’s not to say the game doesn’t lack ambition to modernise the series. Alongside the Story mode, which offers each of the 16 characters a unique path to the final boss, and Practice, online Battle, and Gallery modes, Samurai Shodown has the secretive Dojo mode in its locker. This AI-based mode will create a ghost character from data collected on how you play, which can then be uploaded for other players to battle. SNK is teasing an Iron Man tournament that will challenge you to defeat 100 ghost characters.

There’s certainly a lot of love being put into Samurai Shodown, but it’s also clear there are limitations for a studio that can’t match the scale of, for example, Capcom. The team of 50 is doing a stellar job of bringing Nakoruru, Galford, Genjuro, and the cast back but this isn’t, visually, as slick as Street Fighter 5, even if it does play comparatively on par with Ryu and the gang. That’s not to say SNK isn’t thinking big, with producer Yasuyuki Oda aiming for esports accreditation. Neither should any visual shortfalls distract from how well SNK has bottled the magic of the ’93 original and reworked it into, potentially, one of 2019’s best brawlers.

Want more samurai on your PS4? Catch-up with all things Ghost Of Tsushima right here.