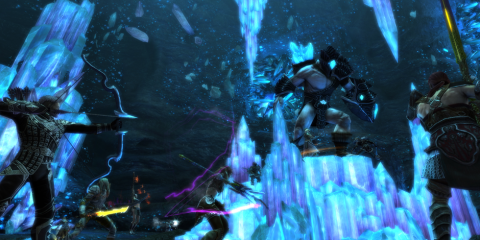 Rift's claims that "we're not in Azeroth anymore" sound a bit like what you'd hear from some naive American tourists in Calgary jabbering about how they're no longer in the United States. Sure, the lawyers wear funny ties and there's that whole free health care thing, but it's hard to argue that one country doesn't feel much the same as the other. And so it goes with Rift. Trion's pretty world is best understood as a satisfying brew containing the best parts of games like World of Warcraft and Warhammer Online: Age of Reckoning, all bottled up in one convenient package that packs a welcome kick for MMO veterans and newcomers alike. Accept it on that level, and it's easy to identify Rift's world of Telara as one of the best MMO landscapes of the last six years, with some reservations.

Above: We're not in Duskwood anymore

As it happens, Rift has everything you'd expect from a contemporary MMO (down to guilds, trade skills, and reputation grinds), including two factions too stupid to realize that they could easily knock out the Big Evil Threat if they just stopped beating the crap out of each other. On one side we have the haughty Guardians, the teacher's pets of the gods; and on the other we have the Defiants, who tinker with steampunk machinery since the gods don't like them so much. In either case, you play as an Ascended (brought back either by science or the gods) whose sole purpose in life is to defeat the dragon god Regulos and the nasty rifts he opens throughout the world of Telara. Depending on which faction you choose, you'll start in an instanced starting zone either 20 years in the past or 20 years in the future. If the approach has a drawback, it's that the linear faction starting zones quickly grow boring as soon as you create your first alternate character. There's plenty of lore in all this, however, which is all the more remarkable because Rift features an entirely original story; one that doesn't have the advantage of long-running franchises propping it up like World of Warcraft or DC Universe Online.

And Rift doesn't waste any time before waving its few authentic innovations in your face. The first you'll discover is its rich class and talent system. Immediately after selecting one of four archetypical "callings" (warrior, mage, cleric and rogue) during character creation, you choose your first "soul" to kick off your adventures in Telara. Souls are essentially individual talent trees in other games, but the key difference here is that you can collect up to nine of them. You get your first three early on through story progression, and then you get most of the rest by stealing souls from evil versions of representative classes summoned through rifts. The process isn't hard; if anything, it's a little too easy. Thanks to the endlessly spawning rifts, our mage picked up all but one of his available souls in around two hours just by running back and forth between the quest NPCs and the ever-present rifts.

Above: Yeah, it looks a little familiar. But, dude, you can be a rogue tank!

The key advantage to this system is getting to customize up to four roles consisting of three souls each that greatly change your gameplay experience. Take clerics. If a cleric wants to knock around some vampires with melee weapons, he simply switches to a role with the Justicar, Shaman and Druid souls. If he wants to sit back and heal his buddies, he activates a role with Purifier, Warden and Sentinel souls. Think of it as a "quad spec" instead of a "dual spec" system. In theory, this means that there are hundreds of ways to make your character stand out without resorting to the "cookie cutter" builds that plague games like World of Warcraft. In reality, trusted cookie-cutter builds are already popping up on the forums and some callings find several of the souls all but ignored. For instance, leveling a mage seems pointless with anything other than a combination of Necromancer, Warlock or Dominator, and we've heard similar complaints from rogues.

Questing in general leaves you with the impression that Rift's development team was sucked through a time rift to 2004. Again and again, you arrive at a quest hub with about five guys with exclamation marks over their heads, you do their quests, and you come back and chitchat for more. This pattern never really changes, although the storyline oddly improves with level. Yet the quests themselves are usually the same boring crap, consisting of killing or collecting five of this or that and running to some guy a mile away once you're done. For a game so deft at filching from its competition, Rift seems to have ignored most of the recent important innovations in quest design. But questing has its high points, too. For one, Rift features a mass-looting mechanic that scoops up all your nearby plunder. For another, you generally don't have to worry about some jackass getting the credit for killing the mob you've been fighting to get to for the last 30 minutes. If you see some punk running toward that last zombie, you can usually click on a player name badge and join a public group with them at any time. Everybody wins, and we like to think that's one of the reasons why Rift doesn't need a "spit" emote.

Above: Have a plant fetish? Rift has a tentacle for that

Yet the grouping system comes into its own around the rifts themselves. This, in fact, is probably Rift's greatest feature. Rifts appear without warning from the various planes (earth, fire, air, water, life and death) and within seconds a small extra-dimensional army of demons or elementals spills out onto the spot where you were pilfering that last bleeding goblin for his candles. If you're just running up, you'll immediately see an option to "Join Public Group" once you get near the rift, and this whisks you into the fray without having to beg for an invitation. Together you fight off wave after wave of nasty demonspawn - sometimes with timers - before you finally get to a boss and close the rift. And, best of all, there's no fighting over loot: rifts award currency and swag based on how much you contributed to the battle, which goes a long way toward dissuading lazy players from idly watching everyone else do the dirty work.

This may remind some players of Warhammer group quests, but here the rifts can spawn virtually anywhere at any time. And spawn they do, almost nonstop. For added excitement, enemies from one type of rift will usually fight enemies from another rift if close enough, even with swarms of players beating on them both. If you're feeling ambitious, you can even open one yourself provided you find a "tear" in the landscape. Yet if you and your fellow Telarans fail to close the rifts in time, the monsters start terrorizing the whole countryside, down to the quest hubs that story progression so desperately depends on.