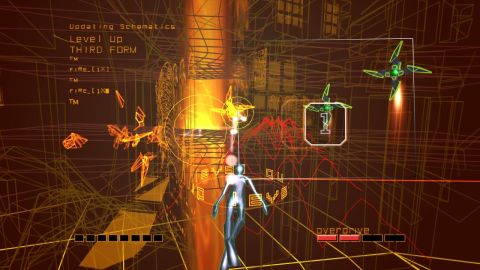 Rez comes complete with a lock-on shooting system not unlike the one in the Panzer Dragoon series, as well as a character upgrade system that also acts as a life bar. Get combos and you’re awarded with items that upgrade your avatar from a small, pulsating ball to…well, something really powerful. For each new form you take, you earn the ability to take another hit before your game ends.

It’s almost impossible to describe playing Rez using simple words. Suffice it to say that the game is a shooter equivalent of a musical instrument. Every level has a fantastic soundtrack that gets augmented by your actions. Destroying enemies brings on new tones, locking on adds percussion to the song, and so forth.

And now gamers have another chance to check Rez out, but with full-screen, high resolution graphics to boot. This is one of those rare titles that add strength to the argument of games as art. Get it.