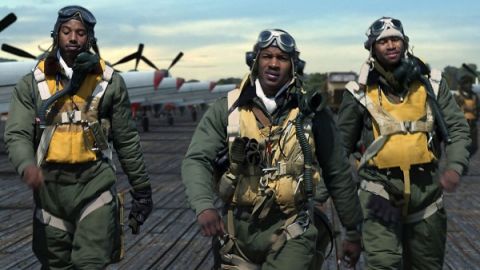 Long Time ago in an airbase far, far, away… the first African-American fighter pilot squadron was formed. Battling Nazis zeroing in from one side and racial discrimination on the other, the ‘Tuskegee airmen’ became heroes at home and abroad. Deserving an Eastwood epic full of sombre insight and elegant understatement, the brave men of the 332nd get the full Lucasfilm treatment instead.

Picking newbie director Anthony Hemingway, producer George Lucas oversees a rip-roaring, flag-waving, barnstorming comic-book adventure that’s as silly as it is fun. Knocking the landing gears off the plot and keeping things barrel-rolling through the immaculate CGI skies, the film allows little time for you to get to know – or care – who anyone is.

Whiskey-sipping college boy Marty ‘Easy’ Julian (Nate Parker) and daredevil ‘Lightning’ Joe Little (David Oyelowo) take the lead behind the machine guns, whilst Cuba Gooding Jr and Terrence Howard do a lot of chin stroking and pipe chomping on the ground. There’s a brief history lesson in a Washington boardroom – and a daft romance in an Italian villa – but the sound of propellers is never far away.

Set in the same clean, colourful WW2 era of Indiana Jones and taking its cockpit cues from Star Wars, the presence of the great beard is keenly felt behind every frame. Sadly, that also means dialogue so corny that the kids would have laughed at it in 1941 (a pivotal moment is ruined by an Aryan snarl of “die, foolish American!”). Luckily, it’s not the script that anyone is going to remember.

Despite looking like the pilots never left the comfort of the green-screen, the frenetic dogfights are some of the best-looking aerial action scenes since Lucas’ original Saturday matinee redux. Twinned with an odd score that mixes Williams-esque bombast and head-thumping techno, the whole thing looks and sounds strangely like a 1940s Top Gun, for better and worse.