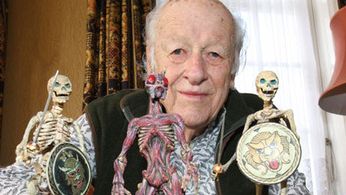 You can tell a lot about a man by the company he keeps – and in the case of stop-motion pioneer Ray Harryhausen, there are A-list directors, animators and FX wizards lining up to pay their respects in this retrospective of his career in creature features.

The story is inspiring.

As a kid, he was besotted with King Kong , and his obsession led him to study biology and photography to capture lifelike motion in his designs. “How we think dinosaurs move owes to Harryhausen,” points out John Landis.

But realism never got in the way of adventure, and Harryhausen would willingly sacrifice two legs from an octopus if the budget didn’t stretch that far.

Now in his 90s, Harryhausen retains a pin-sharp memory and passion for his work.

Harryhausen’s testimony has the intimacy of a workshop session as he explains how he did it, with an enviable horde of test footage, concept art and still-impressive models that are testament to the craftsmanship Harryhausen learned from his engineer father.

With the likes of Steven Spielberg, Peter Jackson and Nick Park ’fessing up to endless steals, the film lays bare just how influential he still is.

As a craftsman who became de facto auteur of his films, Harryhausen’s impact on today’s FX-driven Hollywood is a mixed blessing but the film’s candour brings a hint of regret from today’s CGI technicians.

James Cameron might assume that Harryhausen would be a digital guy today, but most admit that advances in technology cannot match the enduring personality achieved by the man’s handcrafted creations.

In Henry Selick’s words: “His monsters had heart.”