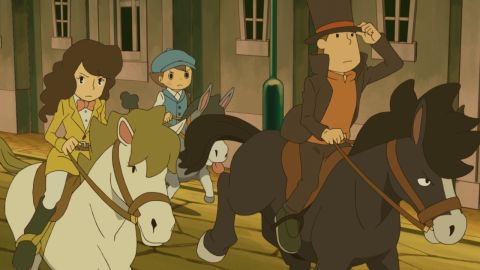 On the DS, Professor Layton admirably created brain-bending puzzles and whimsical adventures that combined European artistic aesthetics with anime style. While the previous entries were celebrated, the series was in danger of becoming repetitive and--dare we say it?--old hat. Thankfully, the jump into three dimensions with Professor Layton and the Miracle Mask freshens things up in some much needed ways.

The fifth game in the franchise, but the second game in series’ chronology (don’t think about that too much) Miracle Mask picks up a year after the Last Specter. Layton, his apprentice Luke, and his assistant Emmy have arrived in the Monte Carlo-like town of Monte d'Or. The town is full of lights and spectacle, but it’s being bedeviled by the Masked Gentleman, an enigmatic man who can seemingly transform people into horses, flies, and stone, though Layton fans will know the mystery is never as simple as that.

The plot follows the usual Layton story beats, and once you meet all the lead characters, it’s not too hard to guess many of the plot’s twists and turns. Still, the story is shaken up some by the intermittent trips back into Layton’s past. For longtime fans especially, it’s interesting to see a younger, hatless Layton in his school days. It lends a more personal edge to the usual mix of ancient secrets and perplexing puzzles.

And the puzzles are still top notch, testing your skills in logic, math, and creative thinking. Thanks to Miracle Mask’s impressive variety of challenges, your brain is never really vexed in the same way twice. It can get frustrating as you’ll likely stumble upon at least one puzzle can’t solve, but that’s why so many Hint Coins are scattered around the environments. If there’s ever an enigma that pushes you too far, once you spend three or four of those coins, the game basically tells you the answer, allowing you to move on to the next puzzle, one that will at least test you in a different way.

The plot and puzzle quality might have stayed the same in the move from DS to 3DS, but the graphics have gotten a much-needed overhaul. The formerly hand-drawn, and wholly eccentric, characters that populate the world, from Layton on down to the most useless of NPCs, are now polygonal, 3D people. Some might miss the quaint design of the older games, and a few characters that would have looked normal in 2D look a little off in 3D, but ultimately the change is a welcome one, and one that meshes with the handheld’s ability to display 3D images.

The world around those characters got an even bigger upgrade, which you can really appreciate with the 3D turned up. The fully rendered world around Layton and company makes pixel hunting for clues more involving than ever. The world is much livelier than its flat, old world, and it effectively makes Layton current again.

Outside of the lengthy story and numerous puzzles, Miracle Mask also has a handful of clever minigames that deepen the experience. There’s a simple puzzle game of arranging items on store shelves, you can guide a simple robot through a series of traps, and there’s even a virtual pet sim where you teach a cute bunny to perform tricks. None could really support their own full game, but all are nice diversions if you get stuck in a puzzle or feel like giving your brain something a little less taxing to do.

By its fifth entry, some might say Layton has gotten predictable; others would say reliably good. Miracle Mask proves the series still has something new to offer, even if that’s more so with its visuals than anything else. Though it would be nice if the devs played more with the formula, at least they’re done enough to keep the entertaining franchise fresh--for the time being at least.