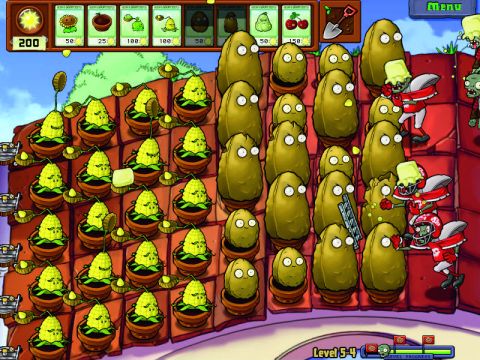 This was on the tip of everyone’s tongues; PopCap just gave it a name. The name they wanted to give it was Lawn of the Dead, but apparently there were issues with that. You have a lawn. Soon, the dead will attempt to cross it and eat – as the game puts it in dripping green capitals – “YOUR BRAINS!” To stop them, you collect blobs of sunlight generated by your Sunflowers, and spend them by placing plants that shoot, block, trap, freeze, eat or explode the zombie hordes.

It’s genuinely one of the most exciting games we’ve played this year. It takes a few onslaughts to accept its oddities: zombies won’t navigate around plants in their way, those plants can only shoot directly forwards, and you can’t place many different types at first. If someone had, rashly, told you that it’s PopCap’s take on tower defence games, you might taste the familiar tang of disappointment. Forget it. Plants vs Zombies belongs to no genre we know, and it’s casual only in the sense that it’s easy to understand. There’s nothing casual about the 30 goddamn hours we’ve spent, effectively, gardening. PopCap supplied us (and presumably other reviewers) with a guide to what to see if you only play it for an hour. We can promise them now that even the laziest, most wretched hack in this industry won’t need it.

The key is that scant tool belt of seeds you can sow: it grows. In fact, you get a new plant type to play with at the end of every level for about seven hours – the total running time of the ‘Adventure’ mode. Soon the seeds available outnumber the maximum you can take on a level - initially seven. So long before you’ve unlocked all 48, the decision of which ones to take with you becomes agonising. If you take both the Wall-Nut and the Tall-Nut for defence, you won’t have space to take the Split Pea to shoot backwards at any burrowing zombies that might get past your Magnet Shrooms. It’s a tough goddamn call.

It helps that you get to peer over your garden fence before a level starts, to see which zombie types are incoming. For a while, the most advanced is a zombie who has had the debatable wit to place a bucket on his head for protection. But soon you’re flooded with more formidable – equally adorable – configurations of ambulatory stiff.

Thriller zombies in red leather jackets, strutting their considerable stuff to summon backup dancer zombies. Floating zombies suspended by helium balloons, miner zombies who tunnel beneath your garden and eat their way back out, crazy zombies who blow themselves up, zombies on bungee ropes, zombies in bobsleds, zombies riding zombie dolphins.

There are counter-plants for each, but the more effective ones only counter one or two types. You tend to learn the hard way which zombies absolutely have to be crushed the second they show up, and which will generally succumb to raw firepower despite their special abilities. Since the mix on each level is different, PvZ never lets you settle into a comfortable build order for your garden, or preferred set of plants.

The drip-feed of new toys is what keeps the Adventure exciting, but very quietly, another side to PvZ is building in the background. Sets of levels are punctuated with silly little minigames, and mysterious options appear on the main menu. By the time you finish the Adventure, the obscene wealth of other things to do already outweighs it for entertainment value.

These minigames, challenges, shops and pet projects are all tied together by an economy: some zombies drop money when they die, all minigames give cash rewards, and your Zen Garden generates a steady stream of income. Your profit from all of these can be spent at Crazy Dave’s car boot sale. Some extremely expensive but extremely tantalising plant upgrades give a powerful impetus to play any and all modes that make you money.

A few of the extra ways to play deserve special mention: Beghouled is a pitch-perfect mash-up in which you play Bejeweled with your plants even as the zombies try to chomp through them, adding strategy to which types you choose to match. Last Stand lets you take as long as you want to design the perfect garden with an enormous budget, but leaves you helpless to watch once the zombies pour in. Our favourite is I, Zombie: a delicious reversal in which you have to choose which zombie types to purchase to strategically decimate a preset garden.

We love Bejeweled and Peggle, but we stop playing those games when we tire momentarily of their singular mechanic, or get irritated by their random elements. We stop playing Plants vs Zombies when someone makes us. It has neither of those limitations, and more substance, invention, humour and depth than either game. It’s not a hardcore strategy game, nor is it a hard strategy game, but it is a strategy game. And a strategy game by PopCap turns out to be a frighteningly compelling thing.