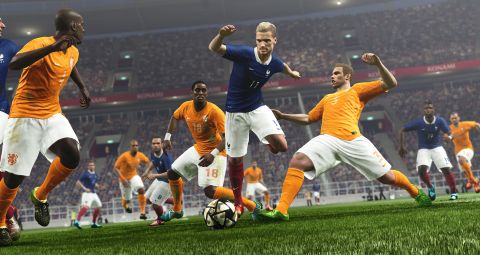 A few minor issues aside, once again, Konami has delivered when it comes to the gameplay. Not only is PES 2016 a high point for the series, it’s the best football game I’ve ever played.

The modern game of football is as much about physicality as it is about pace or technique. It’s strange that no digital representation of the beautiful game has managed to nail this particular aspect of the sport. There have been attempts, with some going hilariously wrong, but nothing to impact the gameplay in a positive way. Enter PES 2016, sporting its ‘advanced collision system’, looking to do exactly that. You know what? It succeeds, quite brilliantly.

Each and every interaction between players matters, impacting the gameplay in some way whether it’s big or small. This means bigger players can stamp their authority on the game - Yaya Toure, Nemanja Matić and Paul Pogba are beasts, devouring the opposition if you play to their strengths, like getting shoulder-to-shoulder with another player, or in a good position to make a challenge.

It works in other ways too, adding an element of strategic depth to the gameplay. Playing as Man United, there were times I struggled to break the ‘park the bus’ strategy of lesser teams. A scary case of gaming mimicking real life, I know. Anyway, in these instances, I brought on Marouane Fellaini. Unlike Anthony Martial, the lanky Belgian was able to use his frame to hold up the ball, bring other players into the game and win the majority of aerial battles. Moreso than any other PES, here it’s all about reading the game, thinking a step ahead and positioning your players accordingly.

You might think all of this makes PES 2016’s gameplay skewed towards the more physically gifted teams and players, but there’s no need to worry. Sure, bigger players have the advantage during both ground and aerial tussles, but smaller players can still work their magic. It’s all contextual as well; you simply use the left stick, no fancy button presses required. The visual payoff from all this is massive. Every outcome is dynamic, so players stumble when clipped, go flying when they’re taken out, and even tangle up without looking like they’re about to kiss. The visual feedback you get means making a successful challenge is at times even more satisfying than a great pass or goal. This is down to the new animations present in PES 2016, three times more than last year, making the game feel markedly more fluid and responsive. Still just behind FIFA, but very close.

For the first time, the PS4 version of PES will allow the importing of images. This means the ability to create your own kits for any teams that aren’t licensed and adding them into the game. The PES community is a great one, so keep an eye on the likes of PES World for some high quality Premier League kits and a whole lot more. You can even import custom club crests, league emblems and manager images; it’s a great little feature that's definitely worth exploring.

The biggest impact of the improved fluidity and responsiveness is felt in the game’s dribbling. It’s glorious. Thanks to the deep stats system, PES has always been good at replicating player styles, but this is the best it has ever been. Dribbling with the likes of Neymar, Hazard and Sanchez feels incredible. The moment you get the ball with them, you know you're controlling a special player. I particularly love slowing the game down with these guys using R2 dribbling and then picking the right moment to burst forward explosively, taking one or two opposing players out of the game completely.

Those one-one-one battles are so much fun because of it, even if you’re on the other side. You see, defensively, the game gives you the tools to deal with moments like these. Defending is more like PES 5 and 6 now, where you hold X to track a player and will automatically make a tackle if you’re close enough. You can make challenges manually too, but being successful is a case of knowing which option to use and when. I just wish the AI would be a bit more aggressive or smarter with its approach to defending. It hardly makes a bad challenge, resulting in the foul counter being low for 90% of matches. In an otherwise fantastic representation of the beautiful game, it’s a bit of a downer.

All of the above complements core gameplay brilliantly, enhancing what was already a highly enjoyable game on the pitch. Passing, shooting and even goalkeepers remain solid, with enough new variations added to keep things ticking over.

Master League has been an area of consternation in recent years, but while it still lacks the depth of FIFA’s career mode, it’s much improved. The menus look good, and you feel more like a manager now - decisions you make have a clear impact on the team, with little stories even emerging throughout the season. Players will speak their mind and bring in extra merchandise sales based on their status, which is a nice touch. Transfers are more logical, but still lack a layer where you are able to negotiate with the player directly rather than just the club. Big transfers are celebrated with a press conference cutscene - I signed Thomas Muller in my Master League and boy did the game make a massive deal of that. There’s still no proper training aspect, though, which given the detailed monthly stats you have access to is somewhat disappointing.

Elsewhere, the usual modes return with little or no changes, including the popular myClub that made its debut last year. It’s still the same set up, so there is no transfer market (rightfully - it keeps things balanced), but the presentation is better and there’s a nice levelling up mechanic that encourages you to use existing players rather than buying new ones. It’s essentially PES’ version of FUT, but way more balanced.

Presentation-wise, PES 2016 has taken a step in the right direction, but still firmly behind FIFA. Up close, the game looks outstanding. However, there is a clear drop in level of detail when you focus on the gameplay cam. It’s not terrible, sure, but when the competition manages to look great in the same setting, it’s a tad disappointing. Similar to PES 2015, night matches still don’t look too great either. Commentary is a bit better for the introduction of Peter Drury, but there is no chemistry between him and Jim Beglin. He’s a bit too loud whereas Beglin is subdued by comparison. You can tell they haven’t recorded in the same room together.

Some areas need work, sure, but PES 2016 still manages to play an incredibly enjoyable game of football. The improved Master League mode is a godsend, adding substance to the package and complementing the excellent gameplay. With the advanced collision system, Konami has done in a year what EA has been trying to perfect since FIFA 12. The added physicality and increased number of animations has done wonders for the gameplay. The introduction of an excellent edit mode (see ‘edit it up’ for more details) to the PS4 version even makes the usual lack of licenses a relative non-issue. Only the drop in gameplay visuals and lack of AI fouls really trouble its relentless march towards greatness.

A few minor issues aside, once again, Konami has delivered when it comes to the gameplay. Not only is PES 2016 a high point for the series, it’s the best football game I’ve ever played.