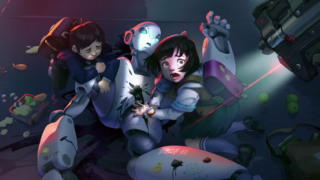 We've known since the Overwatch reveal trailer that the eponymous group is no longer an officially sanctioned band of heroes. But why the group was founded and how it fell apart, well those are the threads that super-smart gorilla Winston is here to share today. Oh, and he'd like to remind you that the open beta for PC, PS4, and Xbox One begins May 5:

As evidenced by the above trailer, Overwatch has plenty of lore and backstory - it just doesn't play out in the way we're used to. There are no lengthy cutscenes, no campaign mode; everything is told through in-game documents, level design, and other media, like comics and animated trailers. But still, I bet plenty of you just learned for the first time that there was a war between robots and humans in this universe, with tensions still boiling under the surface and world violence leading to the team's reformation.

It's a little hard to get used to, but at least the quality is high enough that even an open beta trailer is worth a watch. Or, you could ignore all this and just have fun shooting players in what is, after all, a competitive online team FPS. Your call.