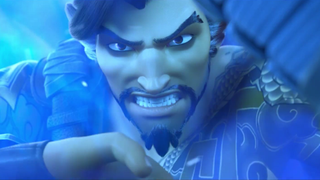 A new Overwatch animated short is here to flesh out the lore behind Blizzard's competitive team FPS, and you might want to have a tissue handy. This time the focus is on Hanzo, a would-be successor to a crime empire who decided to put his skills to more positive use after … well, I wouldn't want to spoil it. Watch for yourself and see:

*sniff* It's just so beautiful … Why can't I have a relationship with my brother like that? I mean, probably because neither of us are ninjas and/or cyborgs, but that's beside the point! As touching as it is, not everyone is as impressed with Blizzard's storytelling. YouTube user Krunkidile says that "really bad writing" has made Overwatch's shorts anything but surprising, and created an animation he claims predicted what would happen.

Well, credit where credit's due, that's pretty spot-on. I don't recall Genji making a getaway in a bumper kart, but I could've missed it. The real version of Overwatch comes to PC, PS4, and Xbox One on May 26.