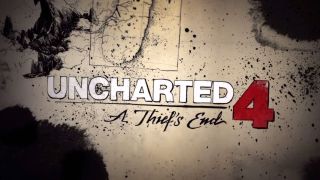 If you didn't know any better, you could easily mistake the bold, painterly opening credits sequence in Uncharted 4: A Thief's End for the introduction to a blockbuster feature film. The orchestral score (a more sombre take on the classic Uncharted theme) maintains a confident rhythm as the on-screen animated notebook revisits Nathan Drake's previous adventures, in the form of beautifully arranged sketches. It's a fantastic sequence boasting a high level of production value, and I couldn't be happier that the names credited throughout aren’t that of Matt Damon, Steven Spielberg or any other Hollywood regulars, but of developers from a video game studio.

Henry Hobson, the creative designer for Uncharted 4’s title credits, explains that the aim of the piece was to “find a way of retelling the epic history of the franchise in a manner that visually echoed the themes of the game.”

“The idea was to evoke those memories”, says Hobson, “bringing back key journeys, trials and moments throughout the Uncharted games, whilst done in a style that felt original and rich but at the same time could have been drawn by Nathan himself.”

If you’ve watched the sequence, you’ll know that it absolutely nails those creative goals, but Uncharted 4’s credits are more important than the immediate outcomes it generates as a dramatic device. The rising quality and prevalence of video game title credits may seem like a pleasant but ultimately trivial evolution for the medium at first, but their development represents a significant evolution for the art form as a whole, as Hobson himself will attest to.

“I think as TV and film sequences are having a bit of a renaissance, the presence of the device elevates the piece as a whole. It's a badge of honour, really”, he tells me. “It's about setting a mood, telling a story and getting the audience into the moment.”

Credit where credit's due

Naughty Dog is not the only one to be embellishing its games with great credit sequences, either, as recent years have bore witness to a proliferation of the structural device across a diversity of titles and genres, from the unique episodic openings of Tales from the Borderlands to the slick sizzle reel-esque credits of Deus Ex: Mankind Divided.

But what distinguishes a video game title sequence compared to, say, those found in film or television? If anyone should know, it’s Will Perkins, Senior Editor at Art of the Title; an online publication which dives deep into the design of title sequences found across the spectrum of popular entertainment (you can check out their Patreon here).

“What makes video game title sequences so interesting is the fact that they don't technically need to have them,” says Perkins, “That is to say, they’re usually not a legal requirement. In the film and TV industry, crediting the cast and crew on screen and up front is often a contractual obligation. With a few specific exceptions (Sid Meier, Will Wright, etc.), similar rules about credits just don't exist broadly in the games industry. So when a game does have a title sequence, it's hopefully there because the creators think it's adding to the proceedings in some meaningful way beyond simply crediting the people involved.”

But it’s the interactive dimension of video games which, according to Perkins, awards developers the opportunity to push the art of title design into new and exciting territory. “On your favourite TV show, can you make the main character grab onto the opening credits and ruin them like you can in the opening of Octodad? Did the latest James Bond movie let you strap on a VR headset and experience the title sequence in immersive 3D like I Expect You To Die? I think it's an incredibly exciting time for title design across the board, but especially so in video games.”

The recent trend of bigger, bolder title credits is also reflective of the widening cultural remit of video games, and the resultantly growing pool of human and technological resources enriching their production. Take the titles for Until Dawn, for example, which play out as a series of haunting images set to an unsettling rendition of Dock Bogg’s “O Death”, neatly packed in the middle of which is a brief cut-scene designed to set the stage for the main events of the campaign. It’s a deliciously creepy curtain-raiser that meets all the standards and hallmarks of something you might see in a major cable TV show, and not just because the likes of Rami Malek and Peter Stormare are credited as members of the extensive cast.

“We felt that Until Dawn’s entirely cinematic gameplay would benefit from an introductory credit sequence that set an appropriate expectation of its style and tone from the outset”, says Supermassive CEO, Pete Samuels, “so the look, feel and flow of the titles were heavily inspired by horror movies and contemporary TV.”

For Supermassive, however, the purpose of Until Dawn’s title credits went beyond aesthetic window dressing, but were designed to serve the narrative too. “It acted as a bridge between the events of the prologue and the rest of the story”, explains Samuels, “reinforcing the consequences of what the player had experienced prior to the credits, and showing why the group were returning to the mountain one year on. Essentially, the credits sequence itself is an integral part of the Until Dawn story.”

This isn’t to say that extended title sequences are always appropriate ingredients for compelling introductions in video games. Think about the brilliance of DOOM’s ‘in media res’ opening, and how that fierce pace might have been dampened if the credits had gone on for any longer than its snappy ten second runtime. Samuels, too, tells me that “if there isn’t a compelling artistic reason for introductory credits, or if there’s a significant risk that such a sequence will be viewed as an obstacle by players, then we [Supermassive] won’t do it. If, on the other hand, we feel that it will add to the entertainment value, then we commit to it as an integral part of the game.”

When used correctly, then, opening titles can effortlessly establish the identity of a creative work in a way like no other, setting the tone for what's to come while introducing the audience to its fiction and easing them into the immersion of fantasy. As games continue to draw in a wider audience, pushing themselves further towards equal recognition alongside that of film and television, the role of the title credits are more important now than ever before.

What are your favourite opening credits sequences of recent memory and beyond? The Last Of Us? Grand Theft Auto V? Or maybe Alien: Isolation? Let us know in the comments below!