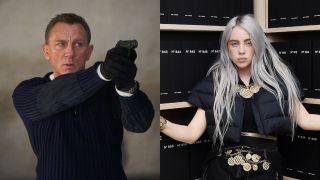 No Time to Die, the new Bond theme written by Billie Eilish and her brother Finneas, is now available to stream.

Continuing the trend of soft, dramatic openings set off by Adele’s “Skyfall,” the title song from Bond 25 a slow build ballad. Eilish has revealed she wrote the song in three days and recorded it on a bunk bed in Texas – a world away from the Bollingers and bullets of 007’s storied history. But before that story: the song. "No Time to Die" – which released on February 13 – is here.

Like it? Those more familiar with Billie Eilish’s most famous hit, “Bad Guy”, may be surprised, but it’s a strong, powerful single that hints at a decidedly darker, sombre tone for Daniel Craig’s farewell to Bond.

Speaking to Zane Lowe on his Music Daily show, Eilish said producer Barbara Broccoli met her in Ireland, gave her an offer, and laid out the movie, which the singer hinted was “fucking fire.”

The turnaround for "No Time to Die", though, didn’t quite mirror the slower pace of the piece: “We got a piece of the script, the first scene, and then we wrote the song immediately… we wrote it in three days. We wrote it in Texas, and we recorded it in a bunk on the bus in a basement in the dark.”

Eilish also said the No Time to Die theme “went through a lot of different versions” but that “it was a really good collaborative experience [with No Time to Die composer Hans Zimmer].”

No Time to Die hits theaters on April 2 in the UK and April 10 in the US.

Relive 007's history with our guide on how to watch the James Bond movies in order.