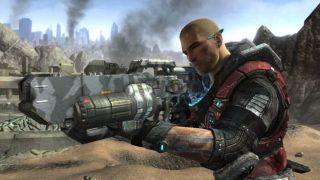 Shooters are a dime a dozen these days, and even when genre-defining franchises like Gears of War, Halo, or Destiny change up the formula, there are still those all too familiar cliches that can’t help but make an appearance. Yet, while some of these tropes can certainly be annoying, others instead bring that strange sense of comfort which comes with knowing exactly what you need to do in a particular situation - those which make up the essential ingredients for concocting a guilty pleasure of a blockbuster shooter. The following game elements in shooters may feel well overplayed for today’s standard, but it’s difficult not to love them anyway.

You're the lone-wolf protagonist

What is it: You're the guy or gal who saves the world (galaxy, reality, whatever) all by yourself. It doesn't matter if you're a grizzled war hero or derive from lowly beginnings; you’re humanity's one and only hope, not to mention the only person with the skills to stop whatever impending doom threatens to wipe out humanity this time around. Granted, it would make more logical sense if mankind's military leaders were to focus their efforts on building an international military coalition, but then who would massage your protagonist’s inflated ego? They'll let you take the glory instead, thank you very much.

Why it’s still fun: While running into the fray with a squad of battle-hardened soldiers can make for powerful drama, watching some AI compatriot gun down an alien parasite is far less entertaining than getting to do it yourself. What’s more, those bone-headed NPCs tend to get in the way of any carefully planned battle tactics, spoiling the moment and severely cramping all semblance of player style. Luckily, it’s not long before the protagonist says something along the lines of "I'm better off on my own" or "You’ll only slow me down", and you’ll be alone again before you know it.

Everyone has regenerating health

What is it: Regenerating health has become the shooter staple for bringing the hero back from the brink of death. Forget medical first-aid packs or portable defibrillators, the best way to recover from a bullet wound is to sit behind cover, take a deep breath, and wait till all that red jelly fades miraculously from your vision.

Why it’s still fun: Whatever your thoughts on regenerating health, having the ability to heal your wounds like a certain Adamantium infused, comic book superhero is what keeps the action flowing. It’s a simple but effective system where there’s no need to backtrack or stock up on medical supplies. Instead, regenerating health is an opportunity to collect your thoughts and rework your strategy before duly returning back into the fight.

The world is full of chest high walls

What is it: When there are hundreds of bullets and a half-dozen explosions surrounding you at any given time, it might be a good idea to hide behind something and avoid taking a chunk of searing hot lead to the cranium. In shooters, players have gotten used to jumping behind cement blocks and sheets of metal in a firefight, especially those which are conveniently sized to perfectly protect them from any oncoming shrapnel.

Why it’s still fun: There is nothing worse than being out in the open and soaking up the enemy’s ammunition in a firefight, so it's time to show some gratitude for those bits of cover which so often save the protagonist from certain death. The overabundance of chest-high walls might clue you into every upcoming ambush, but strategically moving from cover to cover is a tradition so timeless that it's hard to imagine the FPS genre existing without them. Although, admittedly, games like Infinite Warfare and Battlefield 1 are starting to give their heroes - shock - the ability to climb over them.

What is it: Get ready! A massive wave of enemy troops is encroaching on your position! There's absolutely no way you could handle dozens of enemies with only your rifle and a few grenades... but wait! There's a turret nearby that's conveniently facing the direction of the attack. Hop on and mow down anything that wanders into your wide-open firing lane with unlimited ammo and incredible firepower.

Why it's still fun: After all the time you spend conserving ammo and hiding behind cover, there’s no better opportunity to unleash your pent-up rage with gleeful, shameless abandon. The process of laying on the trigger, setting off explosions, and yelling, "Come get some!" is an exercise in distilled gratification at its finest. Unless you’re on the receiving end, obviously.

A badass sidekick doing something badass

What is it: As mentioned earlier, shooter campaigns tend to act as glorified one-man army simulators, but they’re equally capable of giving your fictional team-mates the spotlight every now and again. We’ve all seen it before, your new best mate is leading the way before they spy an unsuspecting enemy ahead, and duly proceeds to take out the poor fella in some ridiculously awesome fashion. It could be a tomahawk to the face, it could be a testosteronic tussle on the ground, or you could alternatively steal your buddy’s glory by shooting the enemy before anyone can even get close to him. That’s what friends are for, right?

Why it’s still fun: Meaningful characterisation is few and far between in shooter campaigns, and so these moments often represent the best insights into the hearts and minds of the folks fighting alongside you. Better yet, some of the stunts they pull off are so absurd that it's almost like watching a black comedy skit, where you can’t help but laugh at the mad murder spree that’s just taken place before you.

What is it: What's a blockbuster action bullet-fest without the adrenaline rush of an intense high-speed chase? After spending so much time on foot, it’s almost inevitable for the campaign to take to the sky, sea or land in some form of exceptionally fast vehicle. From here, you can expect plenty more bullets to fly towards the enemy’s correspondingly turbo-powered automobiles, which will naturally blow up in spectacular manner if you pump enough shrapnel into their hulls.

Why it’s still fun: What's not to like? Chases scratch the same itch that turret sequences do, with the added thrill of g-force. Chase sequences have rightly earned their place as a defined staple of action cinema, but it’s only in a video game where you get to partake in the the high-speed havoc yourself.

What is it: Boom! There's a white flash, smoke engulfs the air, and you're thrown to the ground. Quick! Squirm awkwardly while teammates yell inaudibly through the haze. Don’t worry, your team-mate will eventually grab you by the hand, scream a command right at your face, and you’re free to soldier on through the carnage.

Why it’s still fun: Even at their most uninspired, slow-mo shell shocks still make for memorable moments in shooter campaigns. Remember crawling around the nuclear fallout in the original Modern Warfare, or getting sucked out into space in Halo 4? You might just have to watch helplessly as the game takes over, but it's still awesome.

What is it: Speaking of slow-mo, the typically Michael Bay-esque action technique is employed in shooters to an almost obsessive degree, especially whenever a door needs smashing and the bad guys behind it need killing. The door will be breached, or the windows broken, and time itself will draw to a creeping pace, giving you the perfect opportunity to gracefully line up those headshots.

Why it’s still fun: There’s something deeply pleasing about catching your adversaries out by surprise, especially if that surprise comes in the form of a special forces squad bursting into the room guns blazing. The slow-motion effect also makes you feel a bit like a superhero, with reflexes so lightning fast that you’re able to move in real-time even as everyone else is reacting at the rate of an elderly sloth.

What is it: It’s the arbitrary stealth level of the campaign, and you have the drop on a couple of unsuspecting guards who happen to walk by. You aim your sights, but your commander holds up his hand and whispers those infamous three words, pleading for subterfuge over skirmishes. This one’s more of a Call of Duty cliche than a general shooter trope, as first seen in Modern Warfare’s “All Ghillied Up”, but other games have since caught onto the formula and correspondingly shoehorned them into their campaigns.

Why it’s still fun: An action game which asks the player to restrain their trigger finger for a few minutes is taking a gamble, but it’s an effective one. Not every potential fight is one worth engaging in, and the need to stay hidden lends a palpable tension to the atmosphere. Of course, most of the time, you’re still able to ignore your orders and open fire anyway, which naturally makes the scenario even more exhilarating.

What is it: The mother of all shooter cliches. It's almost unheard of to have an FPS that doesn't have some sort of explosive barrel, crate, or red canister begging to be shot at. These dangerous little guys can be found plonked next to passing guard patrols, sitting in tank depots, or strategically positioned near mission objectives that need to go boom.

Why it’s still fun: Ignoring the flagrant disregard for basic health and safety regulations, it’s always a joyous occasion to spot a conveniently placed explosive out in the battlefield. Like a raging bull, as soon as the player spies red, they know what to do. It doesn't even matter if there's a friendly nearby to get enveloped by the flames. You’ll shoot it anyway. Because loud noises, pretty colors, and fire.