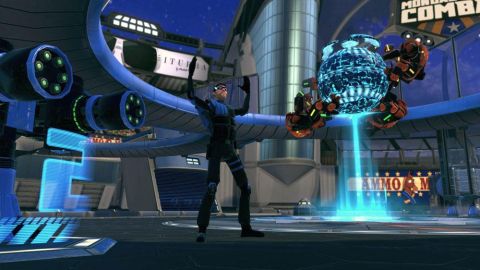 Xbox Live’s Summer of Arcade is turning out to be, at least so far, almost completely brimming with quality. Limbo is amazing, Hydro Thunder Hurricane is brain-cell destroying fun, and now Monday Night Combat comes along to make shooters a joy to play for everyone again. Even the twitch averse players won’t face a frustrating uphill battle against horrendously unbalanced uber-players backed up by ridiculous kill streaks, and with support-oriented play at the forefront, it’s not just the shooting that wins the day.

Above: The look is goofy. The ass-whuppings are serious business

MNC takes place in a future where shooting people is an official sponsored sport (and shouldn’t it be?). Its arenas are actual, constructed-for-competition arenas where Pros (the players) compete for BIG MONEY and BIG PRIZES (well, money at least). The main mode of play, and the only competitive multiplayer mode, is a sort of tower defense/Defense of the Ancients team battle. If you don’t know what we mean by that, don’t worry about it – let us explain: each team has a base, at the center of which lies the Moneyball which is literally a ball of money. The object is to destroy the opposition’s Moneyball, and watching it explode in a shower of coins never gets old.

However, the Pros aren’t alone in their venture. Each base regularly spawns Bots which follow a set path toward the enemy base. Now hold on a sec – if the word “bot” sends crawling waves of revulsion up your spine, don’t freak out just yet. They’re no bots in the traditional shooter sense of player-clones that try to behave like players but fail miserably. No, these bots are mostly fodder, but they come in a wonderful spectrum of varieties, and their main purpose is to create a frontline of combat. Your job is to escort the bots so that they push the frontline ever closer to the enemy base. To mix things up and keep a bit of chaos going, there are always two bot paths in an arena, so you have to watch both sides or split the tasks amongst your teammates.

Above: The Sniper class complements Bots and turrets well. He's also surprisingly not super annoying to fight against

Understand that we’re the types of shooter players that normally hate bots in multiplayer games and want nothing to do with them. In Monday Night Combat, they create an utterly fresh take on competitive multiplayer. And yet, they’re only one part of the refreshing package. MNC’s take on classes also feels balanced, well thought-out, and allows for all kinds of playstyles and experimentation. The classes are: Assault, Tank, Gunner, Support, Sniper, and Assassin. You’ll notice that three of them sound similar, and we love how MNC breaks up the typical “soldier” class into three aspects. The Assault class is balanced between offense and defense and is quite nimble. The Tank class is obviously designed to absorb damage, and the Gunner class does the opposite.

All six classes have four unique Skills. During a match, you’ll earn money from kills, assists, and even pickups (killed players drop shiny gold coins – it’s almost like playing Mario in a shooter). At any time, you can hit Up on the D-pad to open your Skill menu and spend money to upgrade each Skill. Every class gets one passive skill, which typically increases health or damage, but smartly also provides real in-game changes to how you can play – for instance, the Assassin normally has a dagger as her primary weapon, but at level three of her passive skill, it turns into a sword. A class’s three other skills are active, and are assigned to the X, Y, and B buttons respectively. The beautiful aspect of this interface element is that every association with these skills is color-coded, so you have blue, yellow, and red icons on screen for easy reference to keep track of your Skills, and you’ll need to: every active Skill has a cooldown, which you can see ticking down in your HUD.

Above: Meet the Assault, Support (in the background using his heal beam)andGunner classes. On the right is the Jackbot, a huge "boss" bot that spawns late in a match, causing much quaking of boots

The Skills are what really make each class shine, even though each class also has two unique weapons – almost no weapon or Skill crosses over into any other class. The variety is simple, yet crazily deep if you want to try out every class and learn how to use them well. Most players will probably settle on particular favorites, and of course some classes may prove over or underpowered after release, but the devs have promised to provide balance patches should problems arise.

The arenas themselves also provide special opportunities for strategic and tactical play. First, there are the turret stations. Remember how we said MNC is sort of a tower defense game? Well another way to spend money you earn is to build turrets at predetermined stations. There are four different turrets to choose from, and each can also be upgraded for a hefty price. Then there are jump pads, which launch you up to the second level of the arena for a height advantage – some of these are active from the beginning, while others can be activated through a purchase. Oh, and you can also spend money to spawn additional Bots, or activate a station to send opponents flying out of the arena,or use the devastating Annihilator (we’ll leave that one a secret).

Above: Each arena has an upper level of catwalks. Clever players control the high ground. Make sure to look UP in order to not get ganked like a clueless newbie

We’ve spent a lot of space explaining how the game works, but there’s a core reason for this: it’s the details that make MNC great. It’s also a game that doesn’t appear deep at first, and may seem actually quite shallow. It takes a bit of time to understand how upgrading your Skills affects your power, how to play each class, and how to take advantage of the features of each arena. Once the groove kicks in, though, it becomes horribly addictive. And then there are factors on top of everything else, like getting Juiced, which gives you super powers; or the Mascot that roams the arena, which you can shoot for money; or the rare pickup Bacon, which “makes you better at everything” (duh).

You also accumulate “lifetime earnings” which is somehow better than experience points, because, hey, it’s money! But you actually spend this money to unlock Custom Class slots. When customizing classes, you start with an existing class, and then you select three Endorsements (think Perks). This way, you can adjust classes even further to suit your personal playstyle. You can’t change the weapons or skills of the base class, but the order of Endorsements affects how powerful they are – so for instance, if you select increased accuracy as your first Endorsement, it’s Gold, which means it increases your accuracy more than if you select it as your Silver or Bronze Endorsement.

Above: The Support class is extremely satisfying to play. Aside from healing, he can lay down his own turret (which is what he's healing here), has an aura that buffs nearby bots, can hack turrets to boost their power, and can throw airstrikes. Oh, and he has a badass shotgun

MNC’s multiplayer is by far the most fun mode for us, but if you like Horde-mode play, there is the equivalent, called Blitz. You can play this alone or with three other friends online. The twist on traditional Horde mode is that you can purchase turrets to fend off the waves of Bots. We didn’t find Blitz nearly as fun as Crossfire (the competitive multiplayer), but then there are players out there that love them some Horde mode and will plug some serious hours into Blitz.

Like the other Summer of Arcade titles, Monday Night Combat isn’t cheap at 1200 points. Considering how replayable it is, though, it feels like a bargain. Its flaws are largely a matter of preference. Some might not like its somewhat generic, Team Fortress 2-alike look, but we didn’t mind it. Some players might dismiss it due to the unavoidable presence of bots, although we think that would be a mistake. There are also a number of “what the hell how did I die?” moments where enemy players will insta-kill you with grapple moves out of nowhere, but this can be mitigated by proper situational awareness (and learning how to detect the presence of those annoying invisible Assassins). Overall the frustration factor feels very low for a competitive shooter, yet at the same time it’s very hardcore skill-based, so it can appeal to all skill levels. Even when we lost matches or got crappy kill/death ratios, we were still having fun, which can’t be said for a lot of shooters out there.