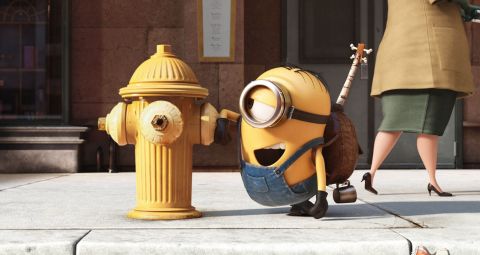 The breakout stars of the Despicable Me franchise seize the spotlight in an enjoyably demented off-shoot that is guaranteed to send their young fans bananas.

Animated sidekicks tend to be a lot less amusing when they get their own vehicles, at least if Puss In Boots, Penguins Of Madagascar and The Cleveland Show are anything to go by.

No such fate awaits the Minions, though, who effortlessly take centre stage in a Despicable Me spin-off so busy, witty and all-round entertaining you won’t have time to pine for the absent Steve Carell.

In truth, the pint-sized lemon functionaries outgrew Gru some time ago: the mock auditions for a Minions movie that played over the end credits of Despicable Me 2 resembled not so much a gag as a coup d’état. But the makers of Minions haven’t taken any chances, creating a backstory prologue for their pill-shaped protagonists’ first solo feature that gives any DM hold-outs no excuse not to join the fun.

Genially narrated by Geoffrey Rush, this introduction spells out the basics – that the Minions have spent most of recorded time seeking detestable bosses to serve under; that their Minion-strations tend to prove fatal to everybody who utilises them (Prehistoric Man, Genghis Khan, Napoleon Bonaparte); and that any scene that doesn’t deliver its punchline within 15 seconds and counting belongs in a different picture altogether.

Preliminaries over, directors Kyle Balda and Pierre Coffin begin the story proper by sending three of their gibberish-spouting sweetcorn-alikes – go-getting Kevin, testy Stuart and good-natured Bob – out into the world to find someone new to work for. The hunt takes them first to New York, then to Orlando and ultimately to London, there to help a female supervillain – Sandra Bullock’s Scarlet Overkill, all spindly limbs, malevolent grin and towering beehive – depose the Queen and assume the British throne.

OK, so it’s not much of a plot. But at least it’s on a level with the prevailing ethos of free-wheeling anarchy, one that encompasses ’60s in-jokes (“Nixon – a name you can trust!”), a Bonnie And Clyde family of crime-committing suburbanites and a rendition of ‘Make ’Em Laugh’ for an audience of yawning Yetis.

Crazy gadgets include a hypno-hat and a lava gun, there’s a clown who juggles bombs while riding a unicycle, and it all ends with an extended Godzilla parody in Trafalgar Square. The soundtrack, meanwhile, serves up a terrific time-capsule of vintage hits that will double as a musical life-raft for parents obliged to sit through this film more than once by their Minion-mad infants.

The breakout stars of the Despicable Me franchise seize the spotlight in an enjoyably demented off-shoot that is guaranteed to send their young fans bananas.