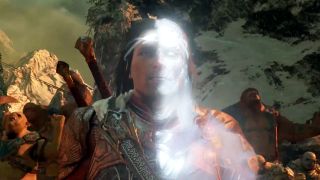 Middle-earth: Shadow of War may have a way to bring your old nemesis back from Middle-earth: Shadow of Mordor. In an interview with Monolith Productions creative vice president Michael de Plater, we raised the possibility of transferring saves between the games to hold on to some of the characters that players have grown fond of facing off with, and it seemed to take Plater by surprise.

"Oh... I don't remember what we're allowed to say about that," Plater admitted, before darting off to consult with a representative. Then he returned with a good old, "We're not saying anything at this time."

That's definitely not a "yes", but if it was a plain "no," they probably wouldn't have handled it so carefully. Shadow of War is trying to make players even more involved in its procedurally generated story elements and a great first step would be to bring in some familiar orc faces from Shadow of Mordor.

There is one minor problem, of course (spoiler warning for Shadow of Mordor). The climactic battle of the first game sets Talion against an army led by whichever orc has become his nemesis, and you can't reach the ending until you kill him super dead. But orcs frequently come back from apparent death at your hands with spiky metal prostheses and quips about 'not letting that happen again' - no reason Shadow of War can't do the same.

Again, this isn't confirmation of a new feature, but consider save importing a strong possibility for now.