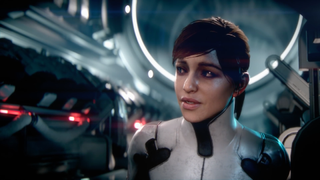 Bioware hasn't been giving too much away about next year's Mass Effect Andromeda and its E3 showing was rather light on actual gameplay footage. From what was there we do know it's going to be very big and very pretty. However, we managed to get creative director Mac Walters talking about the new open world - built, like Dragon Age Inquisition, with DICE's Frostbite engine  - and it looks like everything's getting a serious overhaul.

"When you go into an open world you need to adapt and you can’t just do things the way you've always done them," Walters explains. "So that, in addition to what we were saying about the new engine, has forced us to rethink some of [the old] mechanics, and systems and how they work." Bioware's Yanick Roy has previously said that the team wants to "take space as as thing, and turn it into a place" so this is a truly living world and the key word for the team is exploration.

"Even that approach of saying this is going to be about exploration, it’s going to be more open world, more free form, [with] more choice - those are all things that have definitely factored into the way that we’ve developed our core gameplay like our third person shooting," confirms Walters. "So far I can honestly say the combat is far more fluid, far more organic than it’s ever been before." With so much changing, it's no wonder that we've not seen too much of Andromeda so far. Perhaps Gamescom is too early for another big reveal but we can always hope.