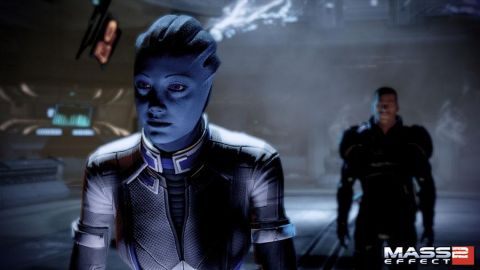 People play games for many different reasons. Some enjoy driving a car in a circle, while others prefer jumping around collecting shiny baubles. Then there are the miscreants who love nothing more than pointing and clicking on whatever they want to die. These are all admirable pastimes, and the games industry has become expert at packaging such experiences into a package best described as "cinematic." But as games have become more "cinematic," a key feature of the cinema is often left behind. Storytelling in games is usually a crude byproduct of game design necessity, an afterthought shoehorned crudely between the ice world and the sewer level. It's natural that games should look to film for help in developing meaningful narratives, but it is often the case that film's narrative devices feel overly contrived in a dynamic, interactive setting in which the player should be calling the shots.

Canadian developer BioWare has always met the challenges and opportunities of interactive storytelling head-on, drawing inspiration from film techniques, but masterfully building upon them and integrating them into interactive experiences that propel the art of storytelling to new levels.

Mass Effect 2 is BioWare's most fully realized work to date. The hybrid shooter/RPG leaves the player feeling like they are interacting not only with polygons and physics, but with heady philosophical concepts and the very fabric of the narrative itself. It's a breath of fresh air in an industry where character development usually goes pistol, shotgun, rocket launcher. It's a rare thing for a game to build such a strong rapport with story and characters, but Mass Effect 2's unparalleled writing, sparkling graphics and top-notch voice talent make it easy to get pulled in.

Another unique concept that pushes the narrative envelope, Mass Effect 2 allows you to import your character from the first game. At import you can alter your appearance and class to your liking, but all your decisions remain intact. A surprising amount of unexpected baggage comes along with you. Throughout Mass Effect 2, you're accosted by a motley gaggle of minor characters whose lives you affected in the first game. You'll struggle to remember some of them, and others you'll recall after a bit of conversation. Some offer thanks, others entreat you to entertain a side-quest. In any case, you come away feeling like you've made a lasting impression on the world, something few games can actually pull off. If you haven't played through the first game, we highly recommend it as importing your character adds immensely to the enjoyment of Mass Effect 2. It isn't a prerequisite, though, as there's plenty for new players to like.

The main story arc of Mass Effect 2 revolves around attacks on several human colonies whose inhabitants have vanished without a trace. You're recruited by the pro-human splinter group Cerberus to investigate the mysterious disappearances. Along the way you recruit a team of elite operatives to take the fight to the bad guys in what increasingly looks like a suicide mission.

Can games make you cry?

Mass Effect 2 has been described as the dark second chapter of the trilogy, the series' "Empire Strikes Back," if you will. Nowhere is this more apparent than in your squadmates' personal missions. Each new recruit has a personal quest you can tackle before setting out on the final mission. Completing a personal quest unlocks a new power and costume, and cements that character's loyalty to Shepard and the mission. Though technically optional, these diversions are the strongest part of the game and you're missing out if you don't play through all of them. They invariably contain a shocking reversal, a moral quandary of some description, and variations on gameplay that go beyond simple combat. One personal quest consists primarily of espionage and tailing a target, while another requires you to seduce your quarry in a nightclub. Be prepared to grapple with topics ranging from broken families and inhumane experimentation to robots' rights and the ethics of genetically neutering an entire race. These personal missions bring both the individual characters and the larger universe to life in a much more satisfying way than your typical RPG fetch-quests. The darkly-tinged scenarios resonate on an emotional level as you guide your squadmates through the conflict to resolution.

Above: Emo game is sad

It's often been asked if it's possible for games to make people cry. Mass Effect 2 sidesteps the question by leaving it up to you whether you want to commiserate or smirk cynically at the pain of others. It would come across as contrived in many games, however the writing here is strong enough that it feels authentic when a character breaks down in tears. And fortunately, the drama has been leavened with a healthy dose of humor to keep things from getting too heavy. Here's one universal archetype we can all relate to:

As we recruited new characters and got to know them, we found it harder and harder to choose just two for our squad at the start of each mission. Sometimes you need a specific character on your team to trigger the right dialog options to start a mission, as in Grunt's personal quest on the Krogan homeworld. If he's not in your party, you can't ask anyone about his situation. Logical, right? Combat abilities are another important consideration. If you'll be facing Geth, you'll want an Engineer who can hack them. Also logical. But we found ourselves regretting having to leave characters behind on the ship; we wanted them to come with because we enjoyed their personalities as much as we needed their combat skills. The downside is that when people spend too much time in a cramped, chilly spaceship revealing their deepest feelings to each other, things can get a little... intense.

Above: That's our Shepard in the middle, if you were wondering

You'll be happy to know that crew interaction is not limited to settling catfights in the corridors, though that is a nice perk of command. Ask the wrong person the wrong thing at the wrong time, and they'll open up to you in unexpected ways. You may end up learning things that you didn't want to know.

Another innovative story mechanic in Mass Effect 2 is the ability to interrupt a conversation with an action. Don't care for that Krogan's long-winded rant about his clan's schemes on galactic domination? Then shoot the exploding tank under his feet and get the action moving! These interrupts can push you more toward Paragon (good) or Renegade (evil) status, depending on context and are an exciting addition to Mass Effect 2's already robust dialog options.