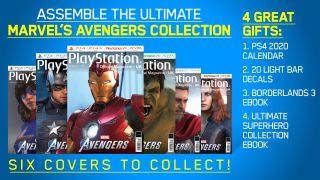 Marvel's Avengers are the stars on the cover of Official PlayStation Magazine #169, which goes on sale today.

On top of that, Control’s developers at Remedy reveal what they think of PS5.

The SSD will allow for  “more data at runtime, allowing us to have much more detail in the game worlds than before,” says technical director Mika Vehkala before tempering expectations: “You could do things faster or you could add more content and run things the same 30fps as before; often times it is the latter,”

You can read the full interview with more devs from Remedy in our new issue, on sale now.

• Save up to 51% when you subscribe to Official PlayStation Magazine.

50 reasons to be excited about PS5

There's more PlayStation 5 news this issue too, as we take a closer look at the latest tech specs and speculate on what could be coming to Sony's next-gen console. We also chat to developers in the industry and gauge their view on PS5.

If you want to read what the industry is saying, and catch-up on all the PS5 news in one place, you'd better pick up issue 169, on sale now.

“We needed somebody who has that fresh perspective, who was there at that moment, can actually bring them all back together,” says Scot Amos of Ms. Marvel, the main campaign’s lead, who’s getting the band back together.

Inside issue 169 we go hands-on with every hero and discover how we can all customise our own unique versions of Marvel's famous characters. Most of all, we finally discover how the game plays – including its War Zones, story missions, and co--op multiplayer. It's all in issue 169, out now.

Journey To The Savage Planet

“At first we didn’t even want a gun!” explains Typhoon Studios' co-founder Alex Hutchinson. “We set ourselves an early goal of having other tools that were more interesting or more useful than the gun.”

This is just one of the unique ideas behind Journey To The Savage Planet, the upcoming indie adventure from a team consisting of former Batman Arkham, Far Cry, and Assassin's Creed  developers. You can read the full interview in OPM#169, out now. As you can expect, the team's previous games combine to create something truly unique, read about it this issue.

For more unrivalled developer access to the hottest PS4 and PS VR games, why not subscribe to Official PlayStation Magazine? You'll save on the cover price and have your copy delivered to your door (or device) each month, complete with exclusive subscriber covers – such as this month's alternative Marvel's Avengers design.