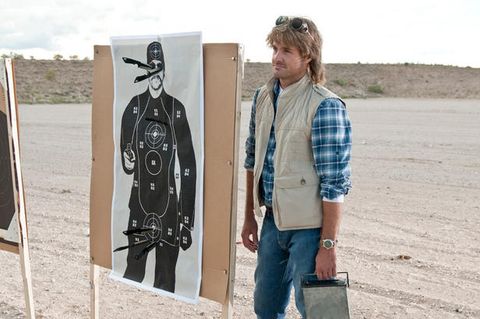 MacGruber review - Pop quiz: could you, under the right circumstances, find a man with a piece of celery up his bottom funny? If the answer’s no – fine. Maybe you suffered some veg-related trauma in a past life. If the answer’s yes, MacGruber might just be for you.

Short on sophistication, but long on belly laughs, it’s as unlikely – but entertaining – as its hero’s luxuriant mullet. Falling, quite vociferously, into the vegetables + bum = unfunny camp is MacGyver creator Lee Zlotoff, who’s apparently suing Forte and co for this cheeky Saturday Night Live spin-off. Frankly, he can get in line.

MacGruber (Forte) may defuse bombs with paperclips, but it’s ’80s action cinema in the firing line. A cross between John Matrix and Ron Burgundy, MacGruber is a soft-cocked hard man who thinks he’s the shit, but turns out not to require the definite article.

Called back to action by Colonel Faith (Powers Boothe), he sets out to avenge himself on archenemy Dieter Von Cunth (Kilmer). This involves dialogue straight from the Steven Seagal soundboard (“MacGruber? I thought you were dead.”/“So did I – but I’m not.”), lots of throat rips (his gory signature move) and Cunth jokes aplenty.

When he’s dropped from the mission, he offers his body as a bribe in a nanosecond. “Just point at something in the room and I’ll fuck it for you!” he pleads.

Like the trailer for a so-bad-it’s-good action movie, MacGruber wastes no time creating a believable universe, expending all of its efforts trying to crack us up instead. Unless you’ve got a stick – or something else – up your behind, you’ll find resistance is futile.