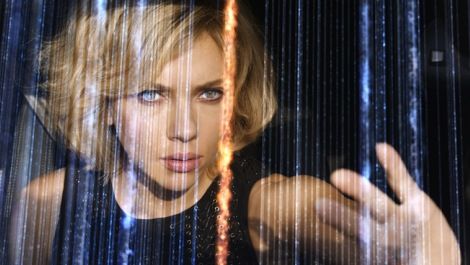 Whether she’s been an alien ( Under The Skin ), superhero ( Captain America: The Winter Soldier ) or purring A.I. ( Her ), Scarlett Johansson has been anything but human recently. In Luc Besson’s preposterous and enjoyable tale about an unwilling Taiwan drug mule propelled into ass-kicking, all-knowing higher consciousness by leaking super-drug CPH4, she gets to show what humans could be, if we used more than 10 per cent of our brains. Besson, back on exhilarating form, demands your attention for this combo of action, pop-science and Malick-style metaphysical musing.

Lucy’s brainpower, kick-started by a beating from henchmen of Korean über-gangster Mr Jang (Choi Min-sik) lets her suck in the world’s knowledge and bend it to her will. Doing some genre bending of his own, Besson shapes Lucy’s vengeance trail into a sci-fi-thriller-cum-superhuman origin story. This is fusion cinema, drawing on Hollywood action, Asian gangster tropes and Euro-arthouse themes. And for seasoning, we have flashes of animal footage and Koyaanisqatsi -style wonderment. Yet, for the most part, the mix is kept under tight control by Besson’s pacing and sheer panache.

Swatting thugs onto the ceiling like bugs, mind-reading through a maelstrom of data, Johansson makes colossal cognitive capacity look way more fun than Limitless or Transcendence ’s power grabs. Showing Lucy’s experience from inside and out, trees pulse, drugs napalm neural networks and phone-calls stream like rain, as Besson’s images pump up the power. Tossed around like a toy by the convulsions triggered by CPH4, or disintegrating in a stream of rebellious cells, Lucy’s mental upgrading has more than a hint of horror about it. Rather less riveting is Morgan Freeman’s Professor Norman. Conveniently unveiling his Powerpoint of Preposterous Science about untapped brain capacity, he drops both viewers and the movie’s IQ a few points.

As it barrels towards its climax, Lucy’s boundless powers overshadow every other character and the action sequences develop an omnipotence problem: witness our hero effortlessly surfing a Parisian car-chase. And there’s a audacious outcome that uses both velocity and grandiosity to propel it into 2001 terrain. But Johansson is magnificent. Steering Lucy from tearful victim, through calmly logical assassin to questing consciousness, she’s compulsively watchable. Scar-Jo owns every inch of this wild ride, and she knows it.