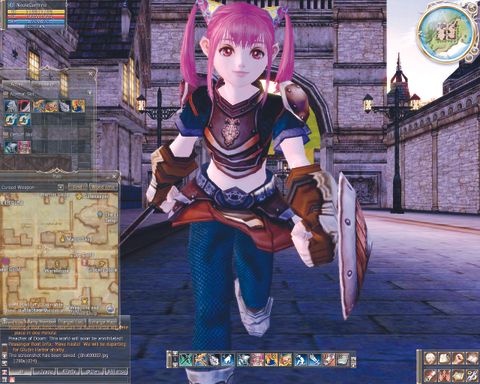 Wandering in the lands of massively-multiplayer online worlds as often as we have, we always knew this day would come eventually. Nevertheless, Lineage II: The Chaotic Throne takes the prize for making us actually do it. In the course of playing, we actually sat down and worked out exactly how many of a certain opponent we needed to kill to get to the next level. Why? Because we knew that would be all we would be doing until we reached that level. And when we managed it, we worked out the figure for the next.

We return to the old warhorse Lineage II in the wake of its latest patch: a one-gig monster that must be its largest since launch. It expands the game with a mass of new features: building on key strengths while introducing new areas and a new race, the Kamael. Other additions include occasional instanced dungeons and an auction system for the really rare items, instead of just relying on player-run shops. It’s all trying to move Lineage into the post-World of Warcraft world. Which is all well and good, but it does nothing to alter the fact that at its heart, this is a pure, grind-based Korean-model MMO of stupefying tedium.

The new starting area created to showcase the Kamael only draws attention to how out of date this game is. You stand in a field, hitting monsters until you go up a level. For as long as most games last, that’s it. A handful of quests are available, but they’re either simple running back and forth between NPCs, placed distantly on the sprawling faux-epic levels, or simply something that gives you a little more money or an item for killing a load of the monsters you’re standing in a field with. And playing as a Kamael fighter, you have a tiny number of tools with which to do so - none of which can distract you from the fact that you’re just pressing F1 and F2 until all the monsters die.

The high-level clan-based warfare system and player-vs-player is where Lineage II’s fame lies, with clans duking it out for the control of castles. Now this is expanded from the castles to many smaller fortresses, enabling more opportunities to own terrain and whatever... but you’re never going to get there unless you’re willing to perform a one-man act of genocide against fields of orcs. As beautiful as the game can be, even with a relatively old engine, it simply doesn’t feel like a world.

It feels like an addiction machine and sod-all else, and for hour after hour the whole game could be accurately simulated by removing all the graphics and replacing them with a bar which gradually filled as you press the same combination of F keys. For the score, we’re forcing ourselves to be a little objective. There are worse MMOs than this, and hammering it with a sub-2 mark would be unfair. But in a world with everything from WoW to City of Heroes to Tabula Rasa, that a game like this can still be considered acceptable entertainment sickens and saddens us. To play this as long as it demands is simply a waste of your life. Please, don’t do it.