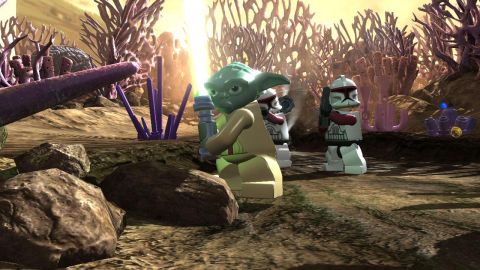 There’s a certain secret thrill that creeps in every time we see our favorite nerdy sci-fi film franchises and characters re-done in LEGO. With all the good Star Wars movies already covered, perhaps it’s time to move on and give another big space-faring series (like Star Trek or hell, even Battle Star Galactica) the LEGO treatment. Playing LEGO Star Wars III: The Clone Wars in 3D has its silly moments and bursts of fun, but most of the time it feels like LucasArts is just beating a dead tauntaun.

Don’t be fooled into thinking this game has anything directly to do with any of the Star Wars feature films. LEGO Star Wars III mines its story and characters from the first two seasons of The Clone Wars animated TV series and doesn’t offer any real story setup for folks who haven’t already seen the show, aside from a bit of scrolling text before each stage. Many of the comical animated sequences that appear hinge on familiarity with the show, and that there isn’t some kind of introduction sequence to kick the game off is a bummer. Instead, you’re unceremoniously dumped onto the deck of the space station hub area and left to figure things out for yourself. The obvious thing to do is use the nearby console to jump into the game’s various mission scenarios, but it takes some exploring to realize there’s a lot more to do on the station.

With little cohesion in the characters and plot from one mission to the next, the main focus quickly shifts to plowing through stages and smashing anything not bolted down to nab coins. As mindless as it is, hunting for bits of terrain, panels, and other weak points to slice through or blast open to reveal hidden treasure is highly satisfying. Coin totals also carry over from one mission to the next and can be spent on the hub station, so your destructive toil is rewarded in the end. Combat itself is far less satisfying, since most enemy troops are taken down with minimal effort, and the boss battles are equally weak. It’s also impossible to permanently die. Running out of life just causes you to infinitely respawn near where you last perished, erasing any semblance of challenge.

Tackling the dangers found on each planet you wind up on requires constantly switching between a small group of characters you’re given. Aside from wielding lightsabers and blasters to smash through patrols of robot soldiers, each character type has its own special ability set that comes into to play for puzzle solving. Jedi can double jump, use force powers, and carve holes in some scenery hotspots with their sabers. Different variations of clone troops can snipe hotspots or setup bombs to break through obstacles. Droids can access special areas and unlock computer doors with a matching minigame. While the crafty stage designs have you regularly switching between character types to progress, the game always tells you which one to use in each situation. It’s helpful at first, but the hand-holding soon gets tiresome.

Despite its shortcomings in the gameplay department, LEGO Star Wars III is a good looking game. Stage designs make excellent use of the 3D effects, featuring regular changes in perspective and shifts in depth to keep things interesting. This also enhances the platforming elements and helps bring the worlds to life. It’s clear the development team put a lot of thought into making good use of 3D elements in each stage.

A glut of unlockables makes LEGO Star Wars III’s smash-and-grab emphasis a somewhat addictive grind. Even so, it lacks the nostalgia factor of its predecessors, and with all of the challenge completely stripped out to cater to a younger slant, it’s tough to recommend this one for anyone but the most devout of Star Wars enthusiasts.