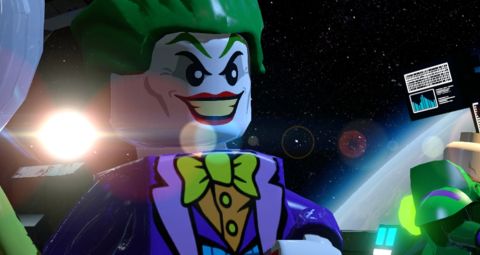 In thousands of years' time, after some Great Event that probably happens and buries us all under metres of dust, future archaeologists will dig us up, and what will they find? Amongst the rubble, bones, and Nokia 3310s, our legacy will be billions upon billions of Lego bricks, a remnant of the world's most beloved and ubiquitous toy. Lego games, on the other hand, sit alongside their video game brethren in the ephemeral category - existing only from console generation to console generation, pleasing owners only as long as their runtime.

There's nothing wrong with that, as long as the 20+ hours you spend in-game manage to entertain and enthral as much as the bricks themselves. The problem here is that Lego Batman never captures my creativity, my imagination and my block-loving heart as much as Lego games have in the past. In fact, at several points in the game, I feel downright bored.

Playing the game itself is fiddly, time-consuming and confusing. The suits, which give different abilities to a handful of characters, are equipped via a wheel, but you have to remember what each one does; you'll find yourself hesitating, trying to recall whether the Demolition Suit or the Space Suit was the one that destroyed silver objects, while hordes of endlessly spawning goons run at you and your AI companions (actual, powerful superhumans) fail to do much in the way of helping.

And all that is when you know what you're supposed to be doing. Though small tutorials help you through the first stages, the game is annoyingly silent when it comes to certain areas or abilities, and you'll have to figure out for yourself that Object A needs to be destroyed or that Character X can walk through fire.

Though the outfits are fiddly, there's some interesting stuff to be found in the characters’ wardrobes. Batman has a sensor suit that allows him to see invisible objects, and several characters have a suit that turns them into a human lightbulb. Sadly, there are also a couple of duff ones - like a hazard suit that lets you hoover up ‘radioactive’ objects that turn out to just be green and yellow Lego - and a special suit that Robin has to wear to make him smart. Poor Robin.

With an overly sullen interpretation of Bruce Wayne's grumpy alter ego, Lego Batman 3 has clearly attempted to replicate the brooding, damaged figure of Christian Bale's Caped Crusader, but what we get is much closer to the sociopathy of Christian Bale's Patrick Bateman; nowhere near Will Arnett’s charmingly unfriendly Batman in the Lego Movie, either.

Meanwhile, The Joker has a voice like the Mad Hatter, with all the sinister villainy of a slightly perturbed bunny, and Solomon Grundy - the swamp-zombie with a penchant for crime and murdering - is recast as a big, stupid, lumbering Hulk-like figure. Though the game's target audience may be too young to have an encyclopaedic knowledge of DC's history, they don't necessarily need every character to be reduced to a clownish caricature, either.

Combat is a big part of superhero games, but the Lego series has never quite managed to get it right - punching, shooting and smashing up the scenery is infinitely more enjoyable than having to deal with waves of weak henchmen that too often feel like filler. Boss battles are treated more like puzzles, with quite a few requiring you to wait for the enemy to throw a vital object at you before you can continue. This isn’t necessarily a terrible thing, and it’s usually a great opportunity to use a variety of powers, but when every boss battle is the same rinse-and-repeat waiting game, it starts to get a bit grating.

Colour-matching mini-games and surprising levels - like a romp through a miniaturised Paris - mix things up between regular, linear stages, but these are quite few and far between, and the mini-games do get tedious after a while. Many of the powers are repeated from Lego Batmans of the past, as well as Lego Marvel Superheroes, though the constant costume changes may leave you longing for a return to Marvel Superheroes' relative simplicity.

Glimpses of humour stand out brilliantly, from the bizarre (an enemy's tentacles being cut up into sushi) to the silly (the superheroes becoming possessed by the emotions of the Lantern Corps, leading The Joker to become all soppy and Flash incredibly possessive). The gags are slightly let down by the insistence of the writers to point out how dumb they are all the time, with Wonder Woman constantly rolling her eyes at bad puns, and a badly misjudged inclusion of Conan O'Brien as the Batcave's tour guide. His constant, irritating and unfunny jokes will tempt you into throwing him off the Batwaterfall, and it comes across as a strange and unnecessary attempt at pop culture appeal.

The game is at its best when it's being self-referential and giving a sly nudge-nudge-wink-wink to DC's fans. Tucked away in the Batcave is a set from Adam West's Batman, which plays the original theme; Wonder Woman's flight is accompanied by the '70s TV theme; unlockable characters include Ace the Bat-Hound and Bat-Cow. In fact, the roster - standing at over 150 characters - ticks even the most obscure boxes (ketchup-wielding villain Condiment King, anyone?).

Lego Batman seems to be going the same way as regular, fleshy Batman was a few years ago, pre-Dark Knight trilogy. Problematic characterisation, strange, unengaging storylines and a glut of superheroes/villains vastly more interesting than Batman come together in a finished product that never quite does the series justice. It really isn't a terrible game, all things considered, but it's not a good Lego game either. What Lego Batman needs - other than a personality adjustment - is a good old-fashioned reboot. We've had enough Lego Batman & Robin; it's time to see Lego Batman Begins.