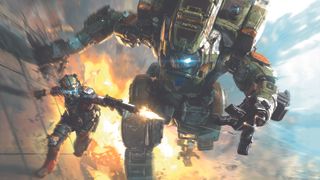 Titanfall 2, Watch Dogs 2 and Dishonored 2 all underperformed in the sales charts last year. Even the mighty Infinite Warfare, though still a huge seller, saw significantly fewer sales than 2015’s Call Of Duty: Black Ops 3. Team OXM debate why sequels might be losing their lustre and what this could mean for the future of Xbox games.

Matt: You know when you’re at a buffet and everything looks good? That’s what the end of 2016 was like in the world of games. There were so many delicious looking titles landing one after the other, that sampling them all at once would have been akin to standing at the end of that metaphorical slab of edibles while a friend tipped it up into an impromptu sustenance slide. And who wants to mix up their devilled eggs with their crostinis? Or, in this case, their Dishonored 2s with their Battlefield 1s? I’m not sure which is the crostini in this analogy – or what a crostini is, if I’m honest – but the point is: games need breathing room.

Tom: Breathing room? I wish someone had told EA that before it chucked Titanfall 2 out the door just one week after Battlefield 1, then watched it criminally undersell. Some games had the misfortune of being sequels to games with negative reputations. I think a lot of people still consider Titanfall as ‘the multiplayer shooter with no single-player’ and Watch Dogs as ‘the overhyped Ubisoft game with a misleading E3 demo’, which presumably didn’t help its sequels fly off the shelves. It’s hard to shake stigmas like that, no matter how good the sequels are.

James: Okay, so maybe publishers would be wise not to fling every hot property they’ve got into the pre-Christmas meat-grinder, but I don’t think a lack of breathing room has stopped success in the past. Cast your mind back and you might just recall a cornucopia of barnstormingly good games all hitting the market within a single six-week spell towards the tail-end of 2011. Dark Souls and Gears Of War 3 came first, followed by Batman: Arkham City and Modern Warfare 3. Battlefield 3 was next, and Skyrim launched just a few days later, entering a crowded market to become one of the bestselling games of all time. Maybe the issue isn’t overcrowding or negative reputations. Maybe it’s just that, after a certain number of botched launches and egregious glitches, players are just getting a little more cautious about ponying up on launch day.

Kimberley: Sometimes I get bored of all the big releases being part of a series. All the games we’ve mentioned are sequels or instalments, and I think people are starting to feel disillusioned. It’s a bit like Hollywood, where every new film seems to be a sequel, reboot or spin-off. It gets predictable and a little stagnant. I understand that this line of thinking undermines how brilliant some of these games are, and it’s not fair to immediately dismiss something just because it’s part of a series. But I think retreading old ground, no matter how many new features or improvements there are, can be associated with a lack of creativity. Honestly, the most enjoyable games I played this year were new titles and individual, self-contained stories: games like Overwatch, Inside, Virginia, Abzû and Firewatch.

Tom: Kimberley’s got a great point here. Our pick for best game of 2016 was Inside. Stylistically similar to Limbo, sure, but it was still an original game. If there’s a silver lining to declining sequel sales it’s that they send a clear message to publishers that people want new ideas. The original Watch Dogs was a hit because, at the time, it felt like nothing else out there. My most wanted game this year is Sea Of Thieves for that exact reason.

James: Fair point, but please don’t take my precious sequels away from me. 2016 would have been bloody unbearable without Dishonored 2, Titanfall 2 and XCOM 2 to distract me from the endless tide of celeb-death and bitter political division.

Matt: Do you think games with longer tails have anything to do with the lack of sales? I mean, lots of games last a lot longer now, some of them even seem to last forever, with loot loops getting their hooks in and keeping people engaged well beyond the ‘normal’ lifespan of a game. I’m thinking things like Destiny, The Division and Rainbow Six: Siege here. Perhaps there are simply too many games to play and not enough time? That’s certainly a problem in the Gilman household. If this is all true, what can devs do to counter this problem? Make fewer games?!

Kimberley: Having fewer games could mean higher sales, as people would feel less torn over which ones to buy. I don’t think that will happen, though. One thing that could drive sales is having more interesting and exciting Xbox One exclusives. When this happens, you see communities come together to celebrate the games themselves a bit more, especially now that Xbox One has Clubs.