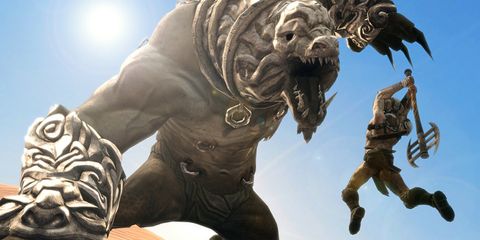 Infinity Blade was impressive and, to a point, proved the gaming prowess of the iOS platform better than anything before it. Developer ChAIR’s hack-and-slash adventure made the platform sing, showing that relatively complex games could work exclusively with a touchscreen so long as they were developed with the limitations in mind. Sure, it was still simple and fairly short, but it gave us a glimpse at a beefy, hardcore, 3D future, away from the platform’s typical assortment of fart apps and casual games that involve throwing birds at pigs. With Infinity Blade II, ChAIR expands on the original’s concepts, creating a bigger, better Infinity Blade that makes the original look like a tech demo.

There are no puzzles to solve or platforms to jump on in Infinity Blade. It’s a game about one-on-one duels; battles between two combatants standing toe-to-toe and exchanging blows. In many ways, it’s reminiscent of the classic Nintendo game Punch-Out!! in that the player’s job is to defend until the opponent is weakened enough to drop its defense, and then slashing them apart by swiping across the touch screen.

Above: Dual-wielding is fast and acrobatic, but does less damage

It’s tactile and fulfilling, just as it was in the first game, and while there weren’t many changes to the traditional combat, ChAIR did add two alternate weapon types that completely alter the flow of combat. Whereas the original had players dodging, parrying, and blocking, the new weapons limit the player’s defensive abilities in favor of more powerful offensive attacks. Two-handed weapons, for instance, remove the ability to dodge, and make perfect timing with blocks and parrying much more important. But there’s a trade-off: the damage was high enough to justify the sacrifice, and made battles come to a quick conclusion as long as we were able to survive the initial onslaught.

Dual-wielding proved fun, too, swapping the shield for a duck to allow for more acrobatic defense. Both new modes work well, and we found ourselves dropping the shield early on and never looking back.

Above: Check out a video of the game in action

The more we played and picked up more powerful weapons and equipped them with stat-altering gems (a new addition), the quicker we’d dispose of enemies, but as time went on Infinity Blade II felt like it was testing us, trying to get us to change things up. Whereas success in the first game relied on memorizing enemy’s tells, success in this one relies on memorization with an asterisk. Enemies occasionally abused our false sense of security by changing up their moves mid-battle, forcing us to adapt on the fly instead of relying on our memorization. It wasn’t unfair, though – the game may have tricked us, but it certainly gave us ample time to correct ourselves, as long as we weren’t too steadfast in our learned ways.

All roads (don't) lead to Rome

The story picks up mere moments after the conclusion of the first game, and has the protagonist fighting through a castle in order to free a captive prisoner so that he can help defeat the Deathless – a group of immortal beings that rule the world. It’s not an incredibly in-depth story, but it’s a story nevertheless, with somewhat interesting characters and English voice acting to replace the original games’ plot-less gibberish.

Above: Though they get repetitive, the finishing blow animations are always cool to look at

ChAIR addressed complaints of linearity with the first game by offering a much larger area to explore. Though still on-rails, the sequel offers a number of different paths to choose from, each with their own set of challenges. These paths all end in a boss that needs to be defeated in order to unlock the final areas of the game, and sometimes defeating these bosses unlocks new areas on that specific path with even more bosses.

But despite expanding the castle and adding multiple bosses, the game still retains one major component from the original: death. If we died to a regular enemy we were allowed to try again, but losing to a boss still sent us kicking and screaming to the beginning of the castle. It's not punishment, per se – more a sign that we weren't strong enough. While regular enemies scaled to our level, the bosses were static in their strength, and when we died we’d usually wait until we were significantly geared up with new weapons, armors, helmets, and magical rings before attempting to slay them again.

Above: We prepare to face our bitter rival: guy with a horse for a head

When we actually were buff enough to take on the bosses we were slightly disappointed by the actual encounters. The boss mechanics are fairly standard, and it isn’t until late in the game that the bosses actually start to throw some curve balls beyond the typical assortment. They’re unique looking and have their own animations, but the fact that they didn’t have many tricks was sort of sad – if there are only a few bosses in the game, they should have brought much more to the table than they did.