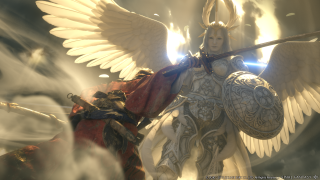 Final Fantasy 14's crossover event with Final Fantasy 15 was a big success. As the MMO is clearly fertile ground for transplanting elements from other games, Official PlayStation Magazine asks its director and producer, Naoki Yoshida, what titles his dream Final Fantasy crossover would involve.

"World Of Warcraft," he responds promptly, "And Diablo!"

He then jokes, "Oh, by the way if Blizzard ever approached [me], you know, saying 'Oh, hey, we want you to take the reins to develop Diablo 4,' oh, I’m gonna drop everything I’m doing and I’m gonna go for it," later describing himself as a bit of a 'fanboy' for the series.

But rest assured, Yoshida-san isn't leaving the world of Hydaelyn any time soon. After the recent release of Shadowbringers, bringing 14's number of expansions to three, the already-huge game is now even bigger. When we ask what advice has for new adventurers, he offers a few pearls of wisdom.

"The advice that we would want to give is not to sort of get head-heavy and like input a lot of information into your mind before starting," he begins, "because Final Fantasy 14 does offer a free trial that people can try out. Rather than trying to get book smart about the game or have other people dictate what to do I think it might actually be best for the players to find out themselves by trying the game out."

As the early part of the game is thoroughly tutorialised, he explains, players have the freedom to get stuck in to whatever interests them. He reassures, "There’s nothing to be scared about. It’s not as overwhelming as you think it is."

He later reiterates, "We would encourage players to just jump in and try our free trial,” adding, “and the other players are Warriors Of Light and are very kind people […] so if you ever do get stuck on something, you can always say something in the chat and then they’ll be happy to help."

Hope for the future

Yoshida is one man filling both the producer and director role. This is an arrangement that began out of convenience under exceptional circumstances during the game's redevelopment and has become the title’s norm. Coupled with his years of experience within the industry, it makes sense to ask him if he has any advice for those just starting their career in games.

He begins by saying that, regardless of creative field, you should enjoy what you’re making. He elaborates, "If people are aspiring to enter the games industry then I would hope that you are a big enthusiast of playing video games. You know, sometimes developers in game companies don’t have that experience of gaming […] and so I think it is very important if you want to get into games […] make sure that you’re thinking about ‘so I’m playing this game but what would I do different or how would I approach it if I were to create a game like this?’"

Yoshida can’t comment in-depth on Sony’s next-generation console or the MMO's possible future relationship with it. However he does broach the subject of upgrading 14's visuals, saying, "Whenever [I tried] to kind of get a feel for how the developers feel on [my] team and sort of casually brought up the subject […] they would reply […] 'Yoshida-san please look at all of these graphic assets we have created so far. And have you seen the amount of […] assets we have? And do you know how quickly we pump out this content? And look at how it is so disorganised and just chaos at this point!'"

He states, "So at that time [I] was like 'Oh, I understand, okay, then let's just hold off on making a determination at this point.' And so we kind of closed the loop at this point. But of course, we would like to revisit and consider the opportunities maybe once Shadowbringers launches and kind of settles down."

Shadowbringers' new world, the First, gets impressive results from FF 14's ageing graphics engine, and the expansion is out now.