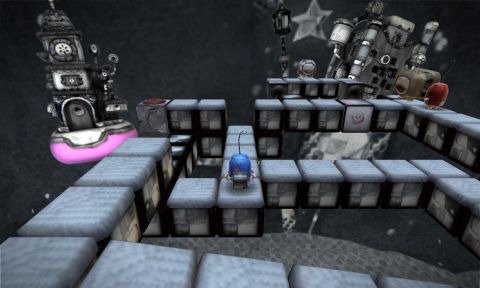 This is a heady time for videogames, friends. Whereas most disc-based games are still very much the AAA, big-budget, bald space marine, first-person shooter fare we've come to expect, the emergence of downloadable titles on everything from consoles to cell phones has given developers the chance to make something smaller and more bite-sized, but no less enthralling.

Case in point: ilomilo. Developed by some rather crafty (and clearly young-at-heart) Swedes over at SouthEnd Interactive, the seemingly simple puzzler has more than just whimsy and cuteness to spare. In actuality, the tale of ilo and milo, best friends that meet up regularly for snacks in the park only to find every day the path is different, is far more diabolical than one would think given the first few minutes of the game.

It all starts out so simple: either a solo player swapping between the pair or a hand-off system between two living beings allows the little rotund critters to make their way from opposite sides of the level to meet in an entirely cube-based world. Despite the obvious multi-faceted nature of their world, the duo can't jump and can't shift to other sides of the cubes that make up each level without some help - namely special ramps or, later on in the game, things like trap doors that let them flip to the underside of a platform. This obviously provides some simple rules that the game regularly bounces new ideas off of.

Often this presents itself in the form of a challenge to cross an otherwise impassable chasm. Thankfully, the pair can grab blocks (which are quickly shrunk and stuffed into a little backpack) and drop them wherever needed. What starts as a simple static one-cube block quickly becomes increasingly complex, adding additional wrinkles like blocks that can extend outward or upward. The goal then becomes using the pair's different starting points in a level to bounce back and forth, scooping up blocks to form winding paths across multiple sides of the world, and tickling the gray matter inside your noggin in the process.

Like many puzzle games of late, ilomilo forces a kind of spatial thinking that can be absolutely mind-boggling at times, but the sense of reward once you've actually sussed out just how the two little guys are supposed to scamper around the level is fantastic. Increasingly, the game plays with the idea that most platforms and walkways have multiple ways of being crossed, and countless double-backs only add to the complexity. The key, of course, is that it never gets completely out of hand; you may slam your head against the wall trying to figure things out, but the solution is often a simple matter of stopping to look around and drink the whole level in, then proceed from a (literal) different angle.

That's not always easy, of course: this is a puzzle game, and as such the camera control is fairly limited. You can sort of "nudge" the camera along each of the axes with the right stick, but it's really just for peeks around corners and such (the game thankfully will "peer" through obstructions to view ilo or milo with a little circular window a la Katamari Damacy). It can be a little frustrating to try to get just the right angle when the zoom options are only close and far, but the limitations were clearly put in place to avoid utter confusion when thinking in three dimensions.

Aside from the main task of joining the pair somewhere in the level, there are numerous little pick-ups scattered around - the collection of which will eventually unlock memories of a reminiscing couple. Completionists will find plenty to keep them going back, as the number of moves required to unite the pair are collected on leaderboards, and little gallery unlockables and music tracks can also be found scattered throughout each level (though a bug currently prevents collecting every single music track). Truly OCD players can unlock a shuffle minigame, but the initial draw is doubtlessly just uniting the buddies.

If there is a problem with ilomilo, it's likely that the game is so short - less than a dozen chapters are available, and while there's plenty of replay value in, say, grabbing a friend to find the floating eggs only attainable in multiplayer, or trying to find all the collectibles, or nabbing every one of the little Safkas in each level to unlock the brain-straining bonus levels, the 800 MSP asking price may seem a little steep.

What you're really paying for, though, is the experience, and there's so much charm in the clearly LittleBigPlanet-inspired visuals and chatter from the various inhabitants of ilo and milo's world that it's all but impossible not to recommend this to anyone looking for a solid (and at times challenging) puzzler. Try to resist buying the full game after playing the demo, we dare you.

True puzzle classics offer a simple set of rules and then build on them with increasing complexity and imaginative level designs. SouthEnd has absolutely connected on both fronts, offering that classic mix of simple concepts with increasingly elaborate challenges, while carefully mixing in just enough humor and charm to make finding out what the next world will offer that much more compelling. It may be over before you want it, but we'd much rather be left wanting more than feeling the game has worn out its welcome. If that's even possible with ilomilo, it sure wasn't obvious to us.