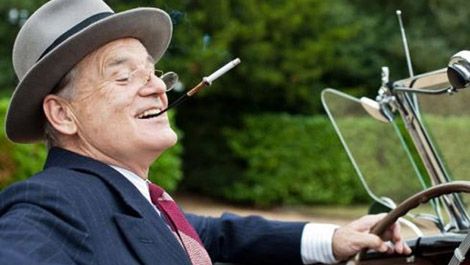 Essentially The King’s Speech with an American president, Roger Michell’s latest tells of a fateful weekend in June 1939 when George VI paid a house call to Franklin Delano Roosevelt in the hope he might be so kind as to give Britain a hand in its impending war against Germany.

Translated here into a country house dramedy in the Downton Abbey mould, it’s a genteel slice of middlebrow award bait that shamelessly targets our prurient fascination with the private lives of the great and good.

Expanded from his own radio play by Richard Nelson, Hyde Park views this potentially seismic encounter between Bill Murray’s affable, polio-stricken FDR and Samuel West’s diffident, stammering monarch from the perspective of Margaret Suckley (Laura Linney), a distant cousin of the President’s with whom he enjoyed a long, secret affair.

This, then, is a tale of two special relationships - one public, one clandestine - teasingly juxtaposed so that each might illuminate and inform the other.

Here’s the problem. The only scenes that matter are the ones in which Murray’s Franklin and West’s ‘Bertie’ come together, most notably an after-hours drinking session in which the benevolent former gives some paternal advice to the insecure latter.

Everything else is window dressing, and that includes the rather sordid moments when Murray takes Linney for country drives that culminate in coyly shot sexual favours being granted and received.

Linney’s character narrates the story and is the film’s nominal female lead. Yet Margaret is nowhere to be seen when the Prez and His Maj are exchanging confidences, taking her out of the picture just at the point when it comes into sharpest focus.

Hudson works better as a showcase for Murray, whose mischievous, deceptively scatty POTUS gives him his best chance yet at a Best Actor Oscar. (His use of his stamp album as a seduction tool shows that philately really can get you anywhere.)

Yet there are other performances to relish here too, Olivias Colman and Williams shining almost as brightly as a brittle Queen Elizabeth and a bolshy Eleanor Roosevelt respectively.

Elegantly shot by Lol Crawley and lushly scored by Jeremy Sams, this is a quality product sure to click with audiences more than, say, Madonna’s W.E.

Still, it’s hard to get too energised by a fundamentally lightweight trifle in which the fate of the free world appears to hang on the King of England eating a hot dog.