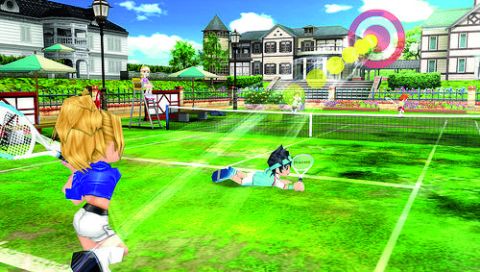 Any new title from the Hot Shots Golf team is worth celebrating, and we’d go so far as to say this one is a near-perfect handheld game. For starters, unlike its PS2 daddy, Hot Shots Tennis: Get a Grip (known as Everybody’s Tennis in the UK) now has a proper Story mode. In it, you walk around hi-res environments, chatting with people and running errands, and it seems all of life’s puzzles can be solved with two rackets and a ball. Despite losing 6-0 and getting a ball in the face three times in the process, defeated bosses inexplicably announce they’ve never been happier. They drop everything – careers, college, even Hollywood – to join the Happy Tennis Club. Really.

You’re encouraged to play dress-up with the cute anime characters, donning a maid’s outfit to get into a mansion or wearing a school uniform to convince a cleaner he should give you the gym key. It’s like a retro Japanese RPG, almost as though the Neo Geo Pocket is still going and has improved. The presentation is another step up from the last Hot Shots Tennis, with gorgeously detailed graphics and some neat, Matrix-style camera swoops. Much of the fun comes from triggering background animations, such as dogs running off dragging their owners along behind. Sadly, you lose these interactive scenery elements in multiplayer, but that’s a small price to pay for a rock solid doubles matches.

Unfortunately, the majority of the career mode is way too easy if you’re au fait with tennis games. The final few opponents offer some challenge, but it isn’t enough. One final gripe is that there are very few special moves. Hot Shots Golf was over-the-top to the extreme, so we didn’t expect Tennis to be quite so straight-laced. The result is slightly vanilla on court action, but the package is so fun-loving and fleshed-out that you’ll never regret joining the Happy Tennis Club.