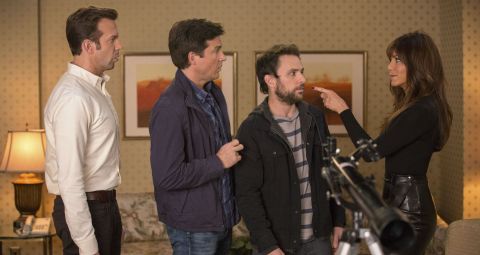 Comedy sequels are possibly cinema’s most thankless gigs. Do you ramp it up recklessly Anchorman 2 style, or take the ‘If it ain’t broke don’t fix it’ route, like the dark do-over Hangover 2? Writer/director Sean Anders and co-writer John Morris, entrusted with helping the bumbling three amigos of Horrible Bosses to a second helping of corporate revenge, take the unusual route of just… dialling it all down. Determined to make an entrepreneurial success of their bathroom gadget, the creepily named ‘Shower Buddy’, credulous heroes Nick, Kurt and Dale (Jason Bateman, Jason Sudeikis and Charlie Day, delivering premium grade squabbling) get suckered into producing a vast order for Christoph Waltz’s avuncular investor. When he cheats them, kidnapping and ransoming his asshole son (Chris Pine) seems the only way to recoup their investment.

Horrible Bosses revelled in the larger-than- life craziness of Kevin Spacey’s psycho-boss, Jennifer Aniston’s sex-crazed dentist, and Colin Farrell’s deluded idiot, all piling red-hot humiliations onto the film’s central trio. Looser, more conventional, and highly dependent on the enjoyably rambling bro-banter of NickKurtDale Inc, Horrible Bosses 2 is a mostly-cosy caper that gives off rather less blackly comic energy than its predecessor. What’s the point of using a riveting, Oscar-winning villain like Waltz in such small story slivers?

Relaxed to a fault, the film’s bumbling plot develops an over-familiar feel, as the friends panic chattily once more through incompetent plans and blundering break-ins. Having Chris Pine’s mercurial, charismatic kidnap ‘victim’ Rex elbow his way into the trio’s plan provides a slick twist and a welcome shot in the arm. But the film still ambles from one jocular set piece to another with little urgency (including a getaway dash spoofing every known car-chase cliché, with Jamie Foxx’s ever-disgruntled Motherfucker Jones at the wheel).

The unabashed raunch of the original has also been tamed somewhat. Though no one’s told Aniston, whose lip-smacking cameo as the revenge-wreaking man-eater is a reminder of what the film is missing (quoteability, brash self-confidence) as well as a useful energy source. Bateman, Sudeikis and Day play off one another with consummate ease, but their amiable antics deserve bigger and better adversaries, rather than this father-and-son farrago.