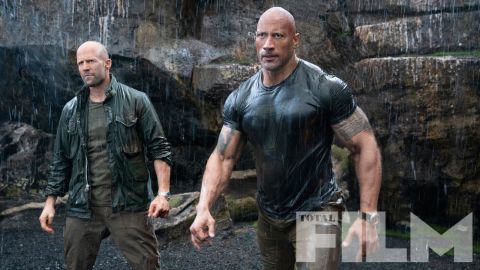 Testosterone, muscles, action, guns and cars… it’s Fast & Furious business as usual. Could be tighter, mind, and the constant dick-measuring gets a little wearying.

The alpha-male friction between DSS agent Luke Hobbs (Dwayne Johnson) and criminal Deckard Shaw (Jason Statham) is one of the more amusing sidelines in the recent Fast & Furious films. The Rock v. Statham… it doesn’t get more testosterone-fuelled than watching these two man-mountains trade bantz and blows. So it makes perfect sense that they form the backbone for Hobbs & Shaw, the long-running series’ first feature-length spin-off.

The titular tough guys are brought together to track down a humanity-threatening super-virus – aka ‘Snowflake’. It’s currently in the possession of Deckard’s sister Hattie Shaw (Vanessa Kirby), an MI6 agent on the run in London after being framed for the slaughter of her team by Brixton Lore (Idris Elba), a self-proclaimed “bad guy” with his eyes on the virus. Now the CIA and MI6 are calling in Hobbs and Shaw, separately, to find her.

As they’re forced to work together, so the mud-slinging begins in earnest (“You sound like a giant tattooed baby,” growls Shaw, in one of the better put-downs). It’s funny, to a point, though the script’s obsession with the lads discussing the size of their genitalia gets a little tiresome after a while. “Over-compensating?” remarks Hobbs, as he sees Shaw’s collection of cars. Talk about meta.

In Briton Lore, who has history with Shaw, they have a worthy opponent. He’s part of ETEON, a hi-tech criminal empire run by a mysterious disembodied voice. Sporting the latest bulletproof material, he’s also been enhanced with cyber-genetics. “We’re being chased by the Terminator!” yells Hobbs, not too far from the truth. It’s all a little sci-fi for the Fast & Furious franchise, though it’s arguably no more ridiculous than launching parachute-sporting cars out of planes (see Fast & Furious 7).

With series regular Chris Morgan and Iron Man 3 scribe Drew Pearce on scripting duties, the story soon goes global, after Hobbs and Shaw find Hattie, and discover she’s ingested the virus in capsule form (no, we’re not sure why, either). Only a Russian scientist (Eddie Marsan) seems to know how to extract the virus – though luckily there seems to be a gizmo to do the extracting in ETEON’s Dr. Evil-like lair.

There’s a lot of references to saving the world – Hobbs estimates this is the fourth time he’s heroically performed the task – but, as ever with the Fast & Furious films, it all comes down to family. Shaw is dealing not only with his baby sister, but also his dear old mum (Helen Mirren) who’s in a spot of bother herself. Meanwhile, a third-act sojourn to Samoa sees Hobbs reunited with his homeland and, in particular, the resentful brother Jonah (Cliff Curtis) he left behind.

This being a Fast & Furious movie, you’d expect the action be top-notch. David Leitch, the supreme stuntman-turned-action-director on John Wick, Atomic Blonde and Deadpool 2, doesn’t let us down. A car/motorbike chase through the streets of London – bread and butter in the Fast & Furious world – is exhilaratingly played out. Same goes for a sequence where Hobbs abseils down the side of a tower block, while a Statham-centric corridor fight is pure Oldboy.

The addition of Elba and the kickass Kirby only adds to the fun, though the film does lose momentum in the final act, with Hobbs’ familial squabbles rather throwing a spanner in the works. A few star cameos, presumably as a set-up for future episodes, also feel unnecessary. But then in Fast & Furious, is there really such a thing as ‘too much’?

Testosterone, muscles, action, guns and cars… it’s Fast & Furious business as usual. Could be tighter, mind, and the constant dick-measuring gets a little wearying.