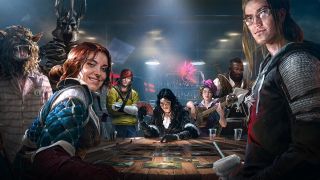 If you've played The Witcher 3: Wild Hunt, you've likely come across Gwent, a collectible card game everyone - including our hero, Geralt of Rivia - is obsessed with. And there's a good reason for this: Gwent is an incredible, approachable card game based around bluffing and deception with a ton of depth. The reception toward it was so strong that CD Projekt Red decided to break it out into its own stand-alone game - but Gwent: The Card Game is so much more than a game of cards.

For those not familiar with the rules, it's actually pretty simple. You start with ten cards, and that's all you get (unless you use other cards or abilities which let you draw more). You place your cards at specific ranges on the board in front of you - short, medium, and long range. Players take turns playing cards, and when you think you're done, you can elect to stop playing for the round. Damages are totaled and the highest number wins the round. Best of three rounds wins.

Where Gwent gets tricky is in how cards interact with each other and change the rules. You can elect to stack your deck with spies which let you draw a ton of additional cards, but end up using their power against you - which you can use to throw the first round, bleeding your enemy while you end up with even more powerful cards. Others let you summon every card of that type, whether it's in the deck or discarded, onto the field once you play it. Hero abilities, factions, deck types - all of these combine to let you bend Gwent to your will.

The problem with the Witcher's version of the game is that you're playing against the AI, and so it's really easy to come up with a strategy, get a ton of really powerful cards by the end of the main quest, and just mow through the opposition. In Gwent: The Card Game, that all changes. For one, you can play against other people now, so the same strategies that may trip up an AI won't work against other live players, who may recognize that you're doing the same thing every single game. Most importantly, the entire game has been rebuilt and rebalanced from the ground up. New cards have been introduced which allow players even more choice in how they build their decks and surprise their opponents.

Gwent: The Card Game doesn't just port the game over with a few new cards and tweaks though. It's gotten a complete visual overhaul, and the kinds of flourishes you see - the fully-animated coin which represents turn order, brighter colors and numbers, and a clearer UI - all evoke feelings of that other digital card game, Hearthstone. It looks so much better than the version of the game found in The Witcher 3, and there are even premium cards which display images in full 3D. It's a nice looking game.

But the improvements don't stop there. Gwent: The Card Game will also come with a fully-featured single-player campaign. I'm not talking just a series of card battles with some text on top. These are multi-hour campaigns featuring fully-fleshed out stories about Geralt and the rest of The Witcher's colorful cast which were either cut from previous games, or based around interesting ideas the writers had but never had a chance to expand on. Each campaign is fully voiced with characters from the main game (that's right, Doug Cockle's gravelly voice returns), feature a side quests off the beaten path, and dialog trees and choices which may reward you with additional cards if you choose wisely.

Most impressive is that it's being designed as a free-to-play game. CD Projekt Red isn't going into specifics just yet about what that entails, but when I spoke to Damien Monnier, lead designer of the game, he told me that he believes the team has "cracked it" when it comes to monetization, allowing players to enjoy Gwent without spending money, and without being forced to grind for additional cards. These could be empty words coming from other developers, but CD Projekt Red has made a reputation for itself as giving players a lot of value for their money, so hopefully Gwent maintains the same philosophy.

It's clear that CD Projekt Red is putting as much love and attention into what could've been a simple throw-away side game as it does into its full-sized RPGs. You can sign up for the multiplayer-only closed beta at playgwent.com, coming in September to PC and Xbox One, with PS4 to come later.

David Roberts
David Roberts lives in Everett, WA with his wife and two kids. He once had to sell his full copy of EarthBound (complete with box and guide) to some dude in Austria for rent money. And no, he doesn't have an amiibo 'problem', thank you very much.
See comments