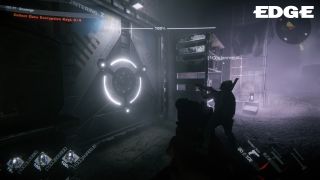 Take a moment to reflect on how many times you disturbed the Witch in Left 4 Dead, or how many of your Payday 2 raids ended with a body count higher than a principality's population. Online co-op is viciously difficult at the best of times, but the industry veterans who formed 10 Chambers Collective spotted a gap in the market: a co-op multiplayer game so challenging its Steam early access page carries a warning.

Enter GTFO, whose unwelcoming acronym fits the abject hostility of its six dark and horror-infested missions. We name-check Left 4 Dead and Payday 2 for good reason, too: as a four-player game with a focus on gadgetry and waves of enemies, those two titles are the north and south by which you acclimatise in your early forays. And, perhaps even more pertinently, because studio founder Ulf Andersson worked on both Payday titles.

The Heat aesthetic's gone in GTFO, though, replaced by a James Cameron sci-fi lens. It's even evident in the game menus, in which lines of unreadable code flit around the periphery, and you don't simply pick a server and start playing but instead have to be booted back to life by what seems to be an unseen shady corporate force.

When your boots hit the ground in a mission for the first time, the atmosphere is an unmistakable melange of the first three Alien movies – wandering a mysterious facility long since abandoned and overrun by hostile humanoid life forms, you use a motion tracker (if you selected it in your loadout) to pick out nearby threats. You inch along foggy corridors with your squadmates, shotguns on hair triggers. In a surprising design move for a game of this type, you interact with computer terminals imbued with that '80s analog futurism, solving puzzles by searching data strings and inputting DOS-like commands.

If the presence of prolonged computer-hacking sequences feels a bit off-kilter for a co-op shooter, the heavy emphasis on stealth and exploration sends things spinning wildly off-axis. One Sleeper (GTFO's common-or-garden enemy type) is capable of killing you in three or four hits. Facing three or more of them at any given time is a serious undertaking, and if you alert one they'll call for more to join them.

Due to all the noise you'll be making fighting them off, your chances of survival decrease every second you're in combat. Worst-case scenario: the many-tendrilled Scout catches wind of your presence, raises the alarm, and sends an entire mob of them after you. It's no exaggeration to say you stand little to no chance of surviving more than one of these in a playthrough.

Punishing then, certainly, but GTFO is also quietly fascinating in the way it does things against the grain. Not only does it end up producing some carefully collaborative and planned-out co-op play by imposing such harsh penalties on combat; it also makes prior strategising easier with little touches such as an Apex Legends-style ping system and the ability to draw routes or circle areas on the shared map screen.

And this being a game of dimly lit labyrinths, the map screen is very important. While locations of supplies such as ammo and health packs are randomly generated, the six levels in the current early- access build are otherwise always the same, and repetition is the only chance you have of making sense of their convoluted paths.

Currently that's the only real reward for replaying GTFO. With no character or gear progression in place yet, there's certainly no danger of over-levelling and taking the challenge away. It will simply be too uncompromising in its vision of hardcore co-op for some, but 10 Chambers is doing enough differently to cause a stir.