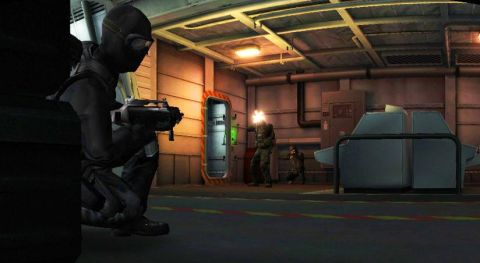 Before we start, let's clear something up, GoldenEye 007 is not a remake of the seminal Nintendo 64 game. It's a reimagining of a game, based on a movie from 1995. The movie, and the Nintendo 64 game that followed it, starred Pierce Brosnan as Bond. This reimagining follows the same story, but inserts current Bond, Daniel Craig, adjusting some of the story details and game mechanics to fit his more physical, less gadgety version of the suave spy.

If you're at all familiar with the original movie or game, you'll experience more than a couple of moments of deja vu. Fortunately this works in the game's favor. Let's be honest, most Nintendo 64 games have not aged well, GoldenEye included. Instead of mucking up your happy memories with cold hard reality, GoldenEye 007 scratches your nostalgia itch while offering a new experience with modern shooter mechanics.

As Bond, you'll gun down villains through a variety of exotic locales in your quest to stop a traitorous spy from zapping the world with a satellite super laser. You'll fight people atop a dam, sneak up and choke out henchmen in a lush jungle, battle thugs in a damaged bunker, and even drive a tank through a city. The levels do an admirable job of appearing much larger than they are as they usher you down a linear path, often telling you exactly what you should be doing and where you should be headed. A couple of levels require stealth, but the dumb enemy AI removes most of the challenge - and potential frustration - from them.

The production values are top notch, with full voice acting and surprisingly fluid animation. If you played the old GoldenEye, you'll recognize some of the set pieces and props (since both games are based on the same movie), and it's neat to see a different take on the more memorable moments. One of them in particular actually asks you to quickly open and close your DS to proceed.

Bond is far more versatile in this version of GoldenEye thanks to the excellent controls. The d-pad and stylus control work like a keyboard and mouse. The buttons on the touch screen used for switching weapons and aiming down the sights are perfectly sized and arranged too, so you'll rarely run into accidental activation of those. Bond can sprint with a double tap of the d-pad, crouch behind cover, aim down the sights of any weapon, and stealth kill guards from behind; in other words, this might be a new version of a 90s game, but it doesn't play like one. The only downside is that Bond's standard walking speed feels a bit slow - it's not a big deal, but it can be frustrating if you're trying to blow through the time trials to unlock cheats later on.

The developers brought the same balance of nostalgic settings and modern mechanics to the multiplayer. GoldenEye 007 has local and online play, and the player count has been bumped from the original's four to six. Many of the customization options and modes from the previous game are here, like the golden gun mode, or explosives only. You can tweak the settings in some interesting ways, like set it so players are required to move to do damage, or set it to remove all targeting reticules and ammo indicators. There aren't a ton of maps, but the ones on offer are designed well. The level design and player numbers work together to create that same frantic feel of the original. If you have a full game, you'll never spend more than a few seconds without shooting at someone.

GoldenEye 007 probably would have sold great if they just remade the original for the DS - they are running on close to the same tech after all. Instead, they made a game that both respects and improves on the original. GoldenEye 007 is not only better than the previous version, but it can also hold its own against modern shooters on the DS; plus it's among the best multiplayer experiences on the system. It's like one of those cheesy TV makeovers; not exactly necessary, but an improvement all the same.