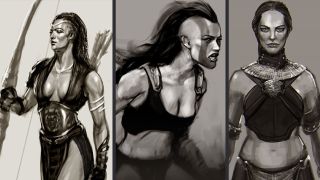 God of War almost featured Kratos' warrior daughter as a main character, according to concept art from Santa Monica Studio. The studio, celebrating its 20th anniversary, shared its most memorable concept art from the history of the God of War games, and while most of them are just pretty reminders of good games, there's one that has some groundbreaking potential.

According to former concept artist Erik San Juan, the Amazonian Warrior from God of War: Ascension was based off of drawings for a character that was meant to be Kratos' daughter: "With the mysterious fate of Kratos at the end of God of War 3, we knew we wanted to give him a successor - a new hero who would go looking for him," Juan writes. "Not unlike the most recent entry in the series, we imagined that he had a hidden daughter and began sketching ideas of what she would look like...Shown here was my only contribution to the team with a tattoo design on her face. Once we knew we were bringing back Kratos in a Prequel these designs would later evolve into the Amazonian Warrior that we see in Ascension." That means she would have been around eight years before lil' baby Atreus even existed…

Some of the other concept art includes the battle of Kratos and Poseidon, sketches of Icarus, and the initial Kratos character design on a paper napkin. You can check them all out here.

It would have been pretty awesome to play an entire game as Kratos' secret daughter… but God of War was so good anyway it ranked in the top 10 of our 100 best games of the decade.