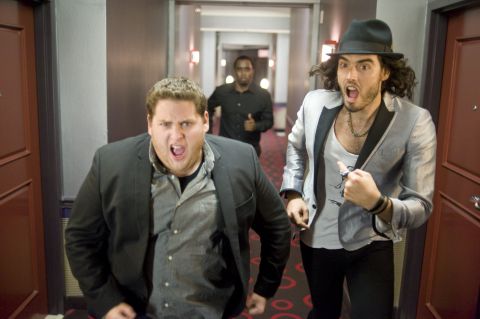 Get Him to the Greek review - Bearing a strong family resemblance to a hit movie famous for its swinging dick (and we don’t mean Russell Brand), this raucous rock’n’roll buddy comedy shares a shedload of spun-off DNA (and Judd Apatow’s producer mojo) with its predecessor Forgetting Sarah Marshall .

He’s reteamed with Jonah Hill, cheekily recast here as wideeyed Aaron, a shy record label lackey escorting “the most self-destructive man in rock’n’roll” from London to LA for a comeback concert.

Where Stoller’s film comes unstuck is in trying to shift into heartfelt ‘relationship’ mode. Hill’s pleasant but underpowered straight guy routine can’t sustain much beyond slapstick and isn’t a patch on his motormouthed Superbad stylings, although a disarmingly charismatic Brand has a ball playing a character mined from his own life story.

Prepare to have a bawdy, taboobusting good time. Just don’t expect it to resonate anywhere except your funnybone.