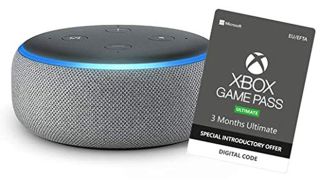 If you're an Xbox One owner then you're probably aware of Xbox Game Pass already, but if not then it's basically a gaming version of Netflix which allows you to download and play over a hundred Xbox games for a monthly subscription fee. The recently announced Xbox Game Pass Ultimate also adds Windows 10 PC games and Xbox Live Gold into a single subscription package, which would normally set you back £32.99 for 3 months but thanks to this Amazon Prime Day game deal you can get yourself connected for just £13.99. It's worth mentioning that this is a one-time introductory offer to the service, so if you've used any other introductory offer to Xbox Game Pass Ultimate on your Microsoft account then this code will not be valid for you.

Xbox Game Pass Ultimate 3 Months | £13.99 on Amazon (was £32.99)
Get access to over a hundred games across your Xbox One console and Windows 10 PC, plus Xbox Live Gold.View Deal

Should you want to make your home that little bit smarter, then there's also an option to add an Amazon Echo Dot (3rd Gen) smart speaker in a choice of charcoal, heather grey, or sandstone finishes. This gives you access to Alexa, Amazon's smart home assistant, allowing you to play music, ask questions, control compatible devices, and much more using voice control. Considering the base price for 3 months of Xbox Game Pass Ultimate is £32.99, if you grab one of these bundles for just £34.99 then you're effectively getting an Amazon Echo Dot for just £2 - which is an absolute steal!

Whichever option you choose, you'll be able to enjoy recent releases such as Outer Wilds and Metro Exodus, along with classics like Dead Rising 4, Middle-earth: Shadow of War, Batman: Arkham Knight, and many more. If you're tempted then you'd better grab this deal quick, as the clock is ticking down to the end of Amazon Prime Day for another year.