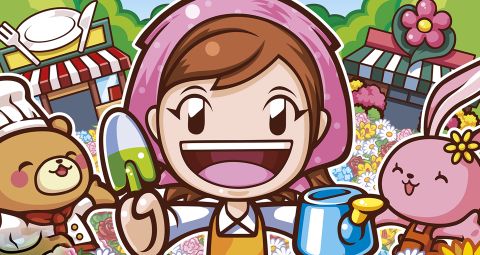 Mama’s back in the garden, and she’s bringing her furry buddies. But with repetitive, shallow gameplay, she should’ve stayed in the kitchen.

Get ready to help devastate an entire forest by growing produce for your furry capitalist friends under the watchful eye of Mama - who is, of course, running this entire operation. Seeds of friendship are nowhere to be found, as your woodland neighbours only drop by for a stock refill. Luckily, the threat of being driven off your farm in an Orwellian coup is minimal, as their grasp of commerce is about as firm as the Stay Puft Marshmallow Man’s resolve to finally start that diet.

When each in-game day dawns, you’ll have a chance to tend your garden, accept the daily request from one of your forest associates - who democratically rotate their visits regardless of how desperate they are for more stock - and complete the mini-games in your mailbox to collect seeds for the various flowers, fruits, and vegetables that you’ll eventually be able to grow.

If you joined Mama on her first foray into the outdoors, you’ll spot some of the gardening mechanics rehashed amongst the 50 mini-games, while tending the plants is now an uncomplicated ritual of planting, watering, and harvesting the results, with just a jab of your stylus. The mini-games are all unique, and the previous title’s gardening gameplay has been worked in amongst them, firmly drawing a line between timed bursts of fun, and the now very basic farm maintenance.

The games themselves are a mixed bag, from rhythm and reaction based catching and grabbing of things, to a number of other bizarre, vaguely garden-themed tasks, like navigating a pair of shears through a vertical maze of roses, guiding a vacuum cleaner through an obstacle course comprised of both junk and valuables, and avoiding a ferocious dog while trying to transport crates of veg from one side of a farm to the other.

Liven up your 3DS album by unlocking virtual frames and stickers to decorate your photos. Want to lie on a bed of tomatoes while your forest friends look on in the distance? It’s only a few prods of the touchscreen away. Your creativity is only as limited as your love of woodland creatures and fresh produce, so go wild.

Between working your way through them as they arrive in the postbox, and general groundskeeping, there’s a surprisingly hefty amount of content. Each activity will transport you on a plane, train or automobile via the load screen and deposit you on an unfamiliar farm where you’ll be set to work by snot-nosed kids or doddering senior citizens. I don’t know where all of the fit, healthy adults of mating age are, but the forest restaurant is getting meat from somewhere, and there aren’t any ranches nearby…

The instructions preceding each game are brief, vague and oddly misleading at times, and coupled with the random occurrences of the stylus motions not being recognised willy-nilly, successfully completing each job to the gold standard required for the reward can turn ugly. Or maybe I just have tremendous anger issues. Either way, it’s certainly not an experience free from frustration when you know you’re not missing a beat and are still getting penalised by a 10-year old inside your 3DS who thinks a packet of seeds is sufficient payment for manual labour.

Ignoring the ambiguous explanations and occasionally unresponsive touch screen, the overall gameplay is markedly simple, and there are no repercussions for screwing up; if you forget to water your plants, they just won’t grow; too little or too much water will only affect which of the three quality categories the crops will fall in to, and you can horde mountains of fruit, flowers and veg in your barn that happens to be impervious to the ravages of time, so don’t worry about finding a furry pile of mulch a week down the line.

The absence of resource management is a let down and could’ve added some much needed depth. Even the animals’ requests - which are the sole reason we’re toiling away on this farm to begin with - can be fulfilled at your leisure, and once they’ve all set up shop and fully expanded to level five (the final and most sacred level of retail attainable), you can get their orders out of the door just seconds after they come a-knockin’.

The mini-games can be replayed from the main menu as soon as you’ve completed them, but once you’ve worked your way through the list - probably twice, and while in a rage in most instances - there’s no reason to revisit them again. Unless you had a bucketful of fun and can’t wait to jump back in. There’s not going to be a point at which Mama packs up the farm, salts the earth and heads into the forest with a box of matches to put an end to it all, so you’ll eventually reach a natural stopping point when the monotony of shipping out goods and watering plants threatens your sanity, but it’ll be entirely up to you when it happens, and that’s just fine.

Levelling up the shops, expanding your garden and exhausting the entirety of the mini-games will take a good few hours and spending shopping tickets to buy pets, shrubberies and decor to spruce the place up throws in a little extra incentive and reward to keep you interested for a while longer. But despite that, Gardening Mama 2: Forest Friends isn’t for everyone (despite the claims of the ESRB rating). It appeals to a certain audience, and if that’s not you, you’ll have figured that out already.

The lack of consequences and pressure-free play are ideal for kids and casual players who might dip in and out, but don’t want to get bogged down in micro-managing supply and demand. Or relish the prospect of being ravaged to death by an angry bear because he didn’t get the mushrooms for his spaghetti on time and now he’s bankrupt with a family to feed, and you’ll do just nicely with a bit of ketchup, thank you very much.

Mama’s back in the garden, and she’s bringing her furry buddies. But with repetitive, shallow gameplay, she should’ve stayed in the kitchen.