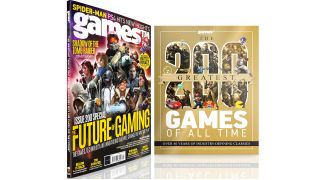 games™ 200 is finally here. The team has been working on bringing you this issue for a long time. With the mag's 15th birthday last year and its big 'How To' special issue in January, the team has always had this one in mind, gradually putting the pieces together. And it's special in more ways than one, as it's not only a celebration issue, but also a bumper one with a 36-page supplement with The 200 Greatest Games Of All Time included.

You can buy yourself a copy now from MyFavouriteMagazines or from your local newsagents/supermarket.

The 200 greatest games of all time

It seemed only right that since the team marked issue 100 with its 100 Greatest Games that they should follow it up in issue 200 with The 200 Greatest Games Of All Time. This is a brand new list with brand new write-ups of all the top picks.

The team started out with a long-list of over 700 entries and gradually boiled it down over several months to the final list. It not only represents the very best the industry has had to offer over the last 40 years of gaming, but also what gamesTM stands for as a magazine. We really hope you enjoy it.

The Future Of Gaming

While the special 36-page supplement reflects on the best of the past, the magazine's lead feature this issue looks to the future with developers talking  through some of the technology and trends that could shape the next five to 15 years of gaming.

From streaming to diversity, blockchain to VR, it covers all of the angles to give you an insight into the things just on the horizon that will change the way we play. It was a fascinating journey to go on and the team is excited for you to read all about it this issue.

Shadow Of The Tomb Raider

There's also a hands-on with Lara's latest adventure to see how Eidos Montreal is picking up the baton from Crystal Dynamics and bringing to a close the rebooted trilogy. Will Lara finally take on the full mantle of Tomb Raider the way we've been expecting? Probably. Will it involve a lot of people being shot in the head with an arrow? Likely. Will it be excellent? Find out in this issue.

It wasn't that long ago that Capybara put Below deep underground as development of its promised ID@Xbox release was being dragged out year after year. Now it is emerging from the depths of development hell and its ready to reveal some amazing secrets its been holding onto. The team caught up with the wonderful Kris Piotrowski to find out how the game has been moving forward, some of the surprises that will be hiding in the depths of Below's island and how its marriage of roguelike and action RPG will all work together. We're tremendously excited about this one.

As the magazine is celebrating 200 issues of games™ (have we mentioned that?) the team wanted to sit down with some of its favourite game makers and find a way to include them in the issue. It just so happened that Tim Schafer was picking up his BAFTA Fellowship in London so they caught up and went game by game through his incredible career and the rise of Double Fine for a very different Complete Guide feature. It's all in his own words with stories from back in the day and some chat about what's to come, like Psychonauts 2.

Speaking of favourites and illustrious careers, the team also caught up with Rhianna Pratchett to talk about how game narratives and the art of storytelling can evolve in the coming years. Her fantastic work on the Tomb Raider reboots are obviously her standout credits, but it was great to see what lessons she learned from her more challenging writing experiences when she was a 'narrative paramedic' on projects and how she's pushed to new modes of working over the years.

There's lots of indie love in Access this issue with Ooblets leading the charge with some hands-on time, a look at Cultist Simulator, the incredible Disco Elysium, a sharp take on a post Brexit Britain in Not Tonight, amazing strategy in small bites with Bad North, a new breed of FPS with Scavengers, hands-on with Wargroove, and a look at Mineko's Night Market. Plus, the latest on Spider-Man and the new battle royale contender Radical Heights.

On top of that, there are reviews for God Of War, Forgotton Anne, Frostpunk, Extinction, Surviving Mars, Chuchel, Minit, Q.U.B.E. 2, The Swords Of Dittom. Meanwhile Retro takes you behind the scenes of Tomb Raider, alongside an interview with Roland Perry, and why Another World is a game changer.