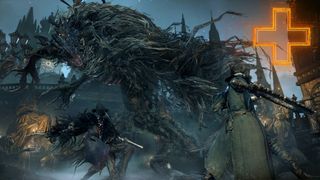 We're celebrating the end of an incredible decade for games, movies, and TV shows. Bloodborne is one of the games that defined the last 10 years of play, placing 23rd in our 100 best games of the decade rankings. Read on to find out why...

They're known for their punishing difficulty, but before Bloodborne, From Software's action RPGs were at least pretty accommodating. Demon's Souls and Dark Souls let you approach enemies and hazards in whatever way you want – with magic from afar, from behind a sturdy shield, or perhaps by plinking away with a bow. But there's only one way to approach the eldritch monstrosities of Bloodborne: with a blade in one hand, a gun in the other, and the hope that it's not your blood that's spilled today.

Bloodborne is defined by the pace of its combat, and while it's not entirely immune to low-risk strategies, it is overridingly aggressive. There's no real blocking in Bloodborne, and ranged options are either scarce, short-lived, niche, or all three. You can parry, but the timing is stricter than ever and the risk is considerable. The best and most reliable option is to master your weapon – whether it be an axe, sword, whip, scythe, spear, or some hybrid or other – and hack the monsters into bits before they can do the same to you.

Fear of the dark

Everything in Bloodborne is designed to force you into frenetic, high-stakes duels. Weapons have multiple forms, but none of them have much reach, so you have to stay close to enemies. You can regain lost health by dealing damage after being hit, incentivizing players to keep up their assault and trade blows. You can even sacrifice health for ammo and then quickly heal back by slashing enemies, a strategy that turns combat into a high-stakes whirlwind of blood and bullets. Even the most sluggish ghouls cover ground quickly, making retreating difficult. And instead of proper magic, pretty much all of the buffs and special abilities enhance your weapon's attack or improve your ability to dodge.

You can change your gear and tailor your skills all you want, but in the end it all comes down to your ability to read enemies and react appropriately. There is no safe or defensive way to play Bloodborne. It is what it is, and it is demanding.

But if you can match its pace and meet it on its terms, you'll find one of the most exhilarating action games of all time. We've been killing monsters in video games for decades, but Bloodborne sells that fantasy in a way no other game does – with bloody flourish, uncompromising ferocity, and an imaginative cast of beasts worth hunting.

That's the other half of Bloodborne's allure, isn't it – the sheer variety of horrors in the night, and the impenetrable mystery of the world they inhabit. There's a sense of sickness and decay to it all, and it only gets worse the deeper you go. Enemies get stranger and more gruesome, warped by the evil at the heart of the hunt.

After a few hours, encountering a plain-old werewolf is a relief. Only four limbs and one mouth? And it doesn't even breathe fire or bleed poison? That's easy street compared to what I've just been through. That's all a part of the ebb and flow of Bloodborne, a core component to its success; it's the way in which it lulls you into a false sense of security before locking you in to hours of terror that has helped it stand the test of time so incredibly.

And what is the hunt? After several playthroughs and multiple endings, I still can't tell you with total confidence. But every time I replay Bloodborne, I understand a little more about it. It's a tale of madness and massacre, deities and dreams, plagues and – most importantly - people. That's the triumph of its hands-off storytelling. All the little secrets keep you curious, and just as the game's layered and overlapping environments drive you to explore, the obscured narrative encourages you to speculate, ask questions, and seek answers to those questions in descriptions and dialogue.

Bloodborne is both an evolution of everything From Software built with Dark Souls, and a grisly distortion of it. It's faster, fiercer, and undoubtedly bloodier. It's a playable nightmare that controls like a dream, and for my money, it's the best game From Software's ever made.