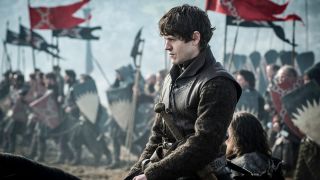 This week's Game of Thrones is already being hailed as the best hour of TV EVER - read our review here - and a big part of that is down to the fact that Ramsay Bolton, everyone's favourite (not) bastard, died. But he didn't just die. He died in such a way as to redefine what is meant by 'poetic justice'. It has to be one of the most obvious, yet satisfying, deaths in Thrones history and I loved every minute of it. Especially Sansa's smirk. And I wasn't the only one who thought Ramsay being eaten alive by his own starving hounds was the end he truly deserved. Karma is a bitch, and so are the fans below...

Thanks to Sansa, Ramsay Bolton is now dog shit. #GameofThronesJune 20, 2016

Ramsay Bolton: a greatest antagonist ever and taught me the true meaning of the phrase, 'what goes around comes around!" #GAMEOFTHRONESJune 20, 2016

Who let the dogs out? #GameofThrones pic.twitter.com/g6KnZnnje3June 20, 2016

Props to Ramsay Bolton for staying on-brand all the way to the bitter end. #GameOfThronesJune 20, 2016

Rest not in peace, Ramsay Bolton. Karma's got you back! #GoT@iwanrheon,i hate you in GoT but damn you delivered!👊🏻 pic.twitter.com/IZAaMH7Aj6June 20, 2016

I wish someone would look at me like dogs look at Ramsay Bolton #GameOfThronesJune 20, 2016