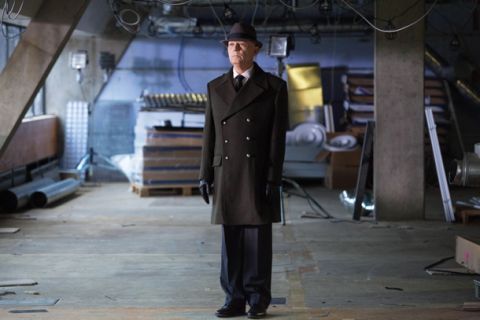 THE ONE WHERE With Peter fixated on using his new Observer skills to intercept and kill Windmark, Walter realises that the implant in Peter's brain may soon become permanent. Meanwhile, Olivia travels to a remote junkyard to recover a magnet crucial to Walter's plan...

VERDICT Fringe 's brilliant final season rolls out yet another cracker of an episode, as Peter's quest to assassinate Windmark comes to a head. More Observer-like than ever, Peter's completely obsessed, working through possible futures as he tries to work out Windmark's movements before he's made them. It becomes a gripping game of cat and mouse (or, technically, cat and cat), as Windmark reveals that he's been tracking Peter too, and the duo face off in a scrap Neo and Agent Smith would be proud of.

After Walter reveals that the effects of Peter's implant may soon become irreversible, it feels for a while as if Peter as we knew him may be lost forever. That his salvation should come from Olivia (traditionally the most rational character in the show) appealing to his humanity and love for Ella is a neat twist in a season chock-a-block with neat twists. Their final scene on the roof, where Peter wilfully sacrifices the chance to get Windmark to save his old self, is Fringe at its brilliant, emotional best.

Olivia has an intriguing character arc of her own, as her scientific mind is forced to embrace the possibilities of faith. It's rather uplifting to think that Walter (and presumably his mystery accomplice Donald) could persuade comparative strangers to guard a giant magnet for 20 years, and you have to wonder how many other people they rallied to the "get rid of the Observers!" cause. Would Olivia have had the presence of mind to use "the bullet that saved the world" to escape from her captors had Nicole not opened her mind to wider possibilities? Impossible to say, but the idea that Etta is somehow watching over her parents is a comforting one. Indeed, it's looking increasingly like the "weaknesses" that make us human are going to be what ultimately saves the world from the emotionless Observers. (Assuming, of course, that Fringe has a happy ending!)

PETER That Observer implant in Peter's neck is a really clever piece of kit – the route to "controlled evolution", as Walter puts it. Helping Peter to utilise the full potential of his noggin, it creates new ridges in the brain, and a cerebral cortex so thick that it overrides the part of the brain that controls emotions. A must-buy for A-level students everywhere.

ETTA LIVES ON Those posters make another appearance, though this time they're being removed to uncover the Observer propaganda. Her presence is felt later, though, via "the bullet that saved the world".

WHAT'S IN A NAME Walter's name for Astrid this week is Esther.

GOTCHA! If you're going to catch out a heartless, evil, emotionless bastard from the future, with super intelligence and the ability to "see" time, you might as well let him know you've beaten him. Peter one, Windmark nil...

NITPICK How does a bog standard video camera (see below) create a 3D holographic image? It's not about the projection tech – we're more worried about how a single lens can create a stereoscopic picture.

NITPICK 2 Even with his new Observer reflexes, it's surely a bit of a stretch that Peter would be able to do intricate surgery on himself to remove the implant at the back of his neck without doing himself a mischief.

IT'S WOTSSERNAME Jill Scott, who plays Simone, is a successful, Grammy-winnning singer. As an actress, she played the lead role in the BBC's adaptation of The No 1 Ladies Detective Agency .

SPECULATION It appears that Simone has sixth sense-like special abilities. Could she be the offspring of one of the Cortexiphan trialists?

Olivia: "I've seen the seams between universes ripped apart, things that humans shouldn't see. You people make up explanations, assign meaning to things without knowing, because it's reassuring, it's comforting. But I can't do that, because I know too much. It's all just numbers, and the Invaders as you call them, they're just better at math than we are. Thank you for the magnet."