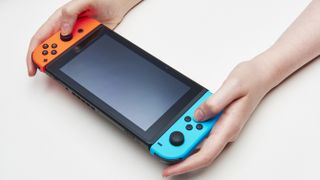 The Nintendo Switch has only been around for a month and we've already fallen in love with the little, idiosyncratic console/handheld hybrid. Not only does the system switch (I'm sorry) between your TV and the device as well as advertised, it has a hell of a launch game in The Legend of Zelda: Breath of the Wild, along with a solid slate of upcoming independent and first-party games. We love it so much that we've decided to celebrate the little things the Nintendo Switch does that we absolutely adore. Like any launch, though, the Switch isn't exactly perfect, and there are a few things that annoy us that we'd love to see Nintendo fix over the coming months and years.

While the Nintendo Switch may not be as technically powerful as its contemporaries, it has one thing going for it: it is smokin' fast. Power it on from sleep mode and within literal seconds, you're back to wherever you were in Breath of the Wild or Shovel Knight. Snap a picture with the screenshot button instantly, hit home, and post it to Facebook or Twitter faster than you can say "Koopa Troopa". I still marvel at how quickly I can navigate its menus, especially if I pick it up right after playing on my PS4 or Xbox One.

The sounds it makes are adorable

Nintendo's UI design may not always be fantastic, but it knows how to imbue its consoles with uniquely Nintendo touches. Yes, the Switch's eShop is completely lacking in jaunty tunes, but it does make a bunch of cute noises as you navigate the system's menus. The cursor makes little click sounds as you move the cursor around, the system whistles at you when you load up your friends list, and it even makes that iconic 'snap' sound from the trailer when you attach the Joy-Cons to the system while it's powered on. These things don't matter… except that they really do.

Setting up a foreign eShop account is ridiculously easy

The Nintendo Switch is region-free, which on its own is pretty great for people who travel abroad or like to import games from other countries. But what's even better is how easy it is to set up a foreign eShop account and purchase games digitally onto your Switch. Follow this brisk, step-by-step process, and you can buy Japanese, European, or American games no matter where you are. Heck, many Japanese games even have full English-language options, meaning you can pick up Disgaea 5 months before its Western release, or snag a physical copy of I Am Setsuna from a Japanese retailer.

Do not underestimate the power of playing Zelda on the go

I realize that the portability of the Nintendo Switch is a key selling point, but it cannot be understated how marvelous it is to take a game as sprawling and detailed as The Legend of Zelda: Breath of the Wild and play it wherever. It's the kind of thing that makes me wish the PS4 or Xbox games I play could be carted around as easily; then I realize I'm stuck to the couch when I want to play Final Fantasy 15, and I sigh. The Switch's library is certainly much smaller compared to other consoles considering it just launched, but if a game is multiplatform in the future, I'm probably going to pick up the Switch version for its portability.

Look, this isn't Stockholm Syndrome talking. The friend codes are back, and everyone rightfully balked at first - and then we started adding friends and realized how easy it is. With the Switch, only one person has to input a friend code. All the other person has to do is accept the invite. This makes friend codes less of a convoluted hassle and more like a randomly-generated username, letting you customize and change your display name whenever you like. Plus, you can send invites with anyone you've connected with through Miitomo or Super Mario Run, which makes the whole process even easier.

Things that annoy us

So while the friend code process is far more intuitive than prior Nintendo systems, the Friends List itself is… not. The name that shows up for each person on your list is the name they used to create their profile on their Switch, which means my Friends List has three Matts on there. I don't know who which Matt is which. This is silly. It's easily circumvented if you just give your profile a discernable username like you would for Xbox Live or PSN, but it's a solution you have to take upon yourself. Nintendo needs to fix this or it's going to be impossible to figure out which one of the dozen of Johns or Janes you actually want to match up against in Splatoon 2.

Nintendo can't help itself when it comes to packaging its systems with a ton of plastic. There's the dock, which you obviously need in order to charge your system while displaying video to your TV. But there's also those two little Joy-Con covers that you can slide on, break while sliding off, then lose in your couch cushions after using twice. There's the Joy-Con Grip, which is just a big hunk of plastic that holds your Joy-Cons; if you want to charge your Joy-Cons while playing, you need the Charging Grip, which costs extra. Then there are the game cases themselves, which are these tall, thin, PSP-sized plastic rectangles containing a single cartridge a fraction of the size. We're trying to save the environment here, Nintendo. Lay off the plastic.

Cartridges are good for portable devices because they don't scratch and they load data much faster than optical disks. The downside is that they're more expensive to produce than discs, especially when they're on proprietary flash cards like the ones the Switch uses. This ups production costs, which means that video game publishers are paying more to make physical Switch games and are passing that cost onto you. PS4 versions of Puyo Puyo Tetris and Rime are $10 cheaper than their Switch counterparts, and because Nintendo seems to be forcing price parity between physical and digital releases (so as not to piss off retailers), eShop purchases cost just as much, despite the decrease in overhead costs. The accessories are way more expensive than they should be, too. The Nintendo Switch may be a fantastic device, but Nintendo is going to charge you for the privilege to use it.

That kickstand is just bad

The rear of the Switch console hides a kickstand you can pop out if you want to play your games on the go with more traditional controllers. While it's a good idea in theory, in practice, the kickstand is a flimsy bit of plastic that will snap off with the slightest amount of pressure, propping up your switch in precarious fashion. I wouldn't trust that kickstand to do anything more than hide my Micro SD card.

Saved data is tied to the console it's created on

Cheers: you can use any Micro SD card up to 2 TB in size (which don't even exist yet), meaning expanding your Switch's memory beyond the included 32 GB will ultimately be cheaper once the price on larger size cards goes down. Jeers: you can't transfer game or save data between the system or memory card card, and you can't use saved data on a different Switch console. This may change with future updates, and Nintendo apparently has access to the cloud to transfer saves if it needs to repair or replace your console, but right now, it's a bummer we don't more granular access to important files on the Switch.

There's (slightly) less debate about the best Nintendo Switch games you can play right now, with something for gamers of all taste