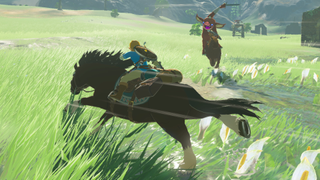 The first time I saw a tower in The Legend of Zelda: Breath of the Wild, I muttered worriedly under my breath. It was E3 2016, and I was watching Nintendo's latest fantasy adventure being played, initially marvelling at how different it looked and played from every Zelda game to date. Then I saw a massive spire shoot out of the ground, a landmark with a device at its summit that unveils small sections of topography on Link's ancient Android tablet. The last decade of open-world design flashed before my eyes, a template introduced and beaten into the ground by Ubisoft's Assassin's Creed games.

Climb the tower. Reveal the map. Go to the icons. Find the thing. Repeat forever. This was what I was worried Zelda was going to devolve into, that its initial glowing impression would give way to a tedium that worms its way into many open-world-style games. Even the best examples of the genre can get that checklist feeling, inevitably turning a grand world to explore into a giant pit full of chores to complete. Games like Far Cry and, more recently, Horizon: Zero Dawn, as effective as their stories are, or how beautiful they look, or how strategic their combat, the sheer muchness of things to do and icon vomit on their respective maps can make them feel more like work than fun; their points-of-interests and item pick-ups becoming inevitable tasks that require nothing more than your ability to walk in a direction and kill another hour or five. What's the fun in being told where a hidden collectable is when all you have to do is saunter over and pick it up?

The Legend of Zelda: Breath of the Wild fixes all this with a simple, easily replicated trick: it doesn't tell you where anything is.

It's funny, because Breath of the Wild actually has a lot of the trappings of open-world actioners and RPGs like Skyrim, The Witcher, Horizon, and even games like Far Cry and Assassin's Creed. There are nearly a dozen towers to climb, each one revealing a section of the map. There are hundreds of shrines to seek out and open up, each one adding a fast travel point and, when solved, granting spirit orbs you can spend on health and stamina upgrades. There are over 700 (!!!) Korok seeds strewn about Hyrule and the surrounding lands, and collecting those will allow you to expand your inventory. That's all on top of the numerous hidden treasure chests, bokoblin encampments, main quests and side quests and memories to find and on and on and on.

There is a lot to do in Breath of the Wild, but it's never overwhelming, and it's all because it treats you as an intelligent and curious person and lets you fill in the gaps on your own as you play. To put it in context, let's take a look at one of the more egregious open-world examples out there: Assassin's Creed Unity.

Look at all this garbage. When you synchronize with a viewpoint, the map dumps all these icons on you at once, and there's no way to sift through everything and decide where to go without hovering over every single one, examining its details, and eventually succumbing to analysis paralysis.  There are icons for treasure chests, collectibles, shopkeeps, single-player quests, co-op quests, all jumbled together in a big, tasteless stew, and while you can filter out the ones you don't need to look at, all of the potential mystery of this world is effectively vomited onto the screen. This is certainly one of the more frustrating examples, but it's been the model for open-world design for years: reveal the map, now here's a bunch of stuff to do. There's no discovery; there is only completion.

Now, let's take a look at what a section of Breath of the Wild's map looks like:

Granted, this is just a small section of the whole map, but even zoomed out it's practically empty in comparison to Assassin's Creed Unity. That's because it was empty until I actually put in the work to find stuff. Once you activate each tower, Breath of the Wild fills in a region of your map, but only with the general topography and the names of forests, fields, mountain ranges, and other features. You're still expected to do the heavy lifting, using your binoculars to look for places of interest, then place pins to keep track of them. Nothing gets filled in until you find it for yourself, and even then, it's only the larger landmarks - towers and shrines act as fast-travel points, while shops, towns, and outposts appear as smaller icons on your map. Everything else? You have to partake in a little cartography. See a treasure chest you can't figure out how to reach? Place a little chest icon on your map. Want to keep tabs on the cooking spots you find out in the wild? Put down a pot icon. You fill in the map how you want to, which allows you to include the details that are most important to you.

As a completionist, I wasn't sure how I would take to simply not knowing where everything is at all times, but amazingly enough, it's gotten me to let go of those urges and simply enjoy being out in the wilderness. I see the world less as an obstacle keeping me from reaching my next quest destination or collectible and more as a fully-realized world that begs me to get lost in it. I find myself poking into corners of the map I normally wouldn't touch, pushing myself past my limits to see how far I can get through a deadly zone without dying. I'm talking to everyone in town because I don't know if a random person has some juicy info on some cool secret to look for in the forest over the ridge. I'm allowing myself to get pulled off the beaten path as I head toward my ultimate destination because of the potential for mischief and its subsequent rewards. I'm realizing that I can't be a completionist because Hyrule actually feels untamable.

Because The Legend of Zelda: Breath of the Wild doesn't explicitly tell me where everything is, I'm more preoccupied with the act of discovery instead of accumulation or completion, these things being an organic result of simply moving through the world. The feeling I get from playing Breath of the Wild, then, isn't "Oh good, I finally grabbed all the damn Korok seeds in this region", but is instead "Oh, wow, I can't believe I found that there. What else is this game hiding?"

Years of the standard open-world design formula have trained us to see them as things to consume rather than places to lose ourselves in and explore. By not telling players anything other than the most necessary navigational information, Breath of the Wild implies a world of limitless potential, a land where the most exciting thing is the thought of what could be around the bend, and then actually finding it on your own. A Nintendo game in 2017 respects your ability to figure things out on your own and your desire for surprise and accomplishment and as a result has become one of the most forward-thinking open-world games in years. More designers should take a cue from Zelda and have the courage to allow you to get lost, because finding your own way is far more satisfying.