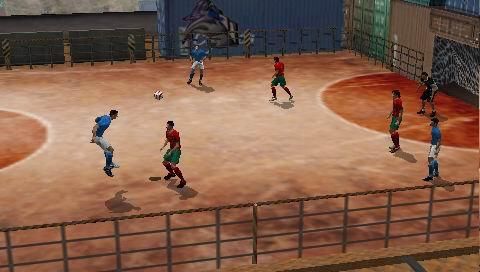 Playing FIFA Street 2 is like picking a lock, except you've 200 keys, the clock is ticking and the treasure might be in another room. Despite its bewildering combination of key presses and skill moves, you're never sure how to score a goal, or whether to bother at all.

You rarely hit the net unless you've done about three tricks, while some games can be won by ball skills alone. To make things even more complex, other matches can be won by making men fall over.

Confusing? Yes. Rubbish? Not entirely - because while FS2 yields inconsistent results, the process is invariably entertaining. One second you're cursing the porridge-like tackling animations, the next praising the fluidity of an overhead kick as you dance around three players and detonate the net like a missile.

The key isn't to treat it like football, but basketball. Or 'sports entertainment'. Its core controls are a dead-ringer for NBA Street 3.

As a simple test, if you a) Love PES5 b) Can remember when Blackburn won the Premier League and c) Aren't entirely comfy with doing a Back 2 Biscuits to earn 800 Skill Bills while rocking to DJ Marky and Bungle's 'No Time 2 Love', then FIFA Street 2 isn't for you.

MC Harvey has gone, replaced by a 'radio' featuring Grooverider, some Brazilian bloke and - every silver lining has a cloud - Radio 1's Zane Lowe. On the flip side, Harvey was always going to get canned, because FIFA Street 2 is the pinnacle of committee-led game design - a scientific tapestry of market research designed to look messy and 'real'.

The soundtrack flits from Editors to Coldcut to DJ Fresh in a calculated attempt to appeal to people of all ages, tastes and backgrounds.

Ball juggling is the key addition. Hold L1 and your players will do keep-ups, which can be linked to skill moves (via right-stick twirls), or chained into combos with lofted passes.

It's possible to, say, flick the ball over an opponent's head (R2 + right analogue), catch it with keep ups (hold L1), back heel it to a team mate (square), and reverse volley it into the top corner (circle) - and that's a 'basic' combo.