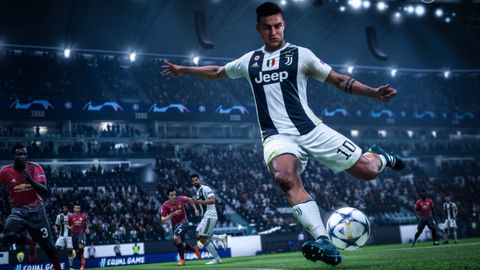 The Champions League expands FIFA’s exhaustive selection of licences – but thanks to lessons learned last year there’s plenty to love out on the pitch, too.

The age-old FIFA vs PES argument has become a touch outmoded. It may serve some purpose for social media confirmation bias: the diehard Konami fan insisting PES’s player faces are better, the 20-year FIFA veteran evangelising Luton Town’s away strip (which, admittedly, is lovely). But the entire landscape has become too partisan. Much as no United or Liverpool fan is going to switch to City or Everton between seasons, so your average Johnny Football is in too deep to reverse loyalties. If you’re team PES, and reading this, be honest: nothing I write is going to convert you to FIFA.

Here’s the thing, though: if you’re team FIFA, there is still a heated debate to be concluded. Because within that dedicated audience sit factions who want their mode, and their mode alone, updated each season, at the behest of all others. Ultimate Team. Career. Pro Clubs. All three have a dedicated, torch-brandishing crowd, who proclaim that they won’t be buying that year’s edition if their respective favourite isn’t fixed/upgraded/modernised. I’ll get to how each fares shortly.

This review was originally published in September 2018 with the caveat that Pro Clubs would be assessed at a later date. That has now happened, and the following text was updated in mid-October as a result.

The single exception to the above rule is story mode The Journey, which everyone plays for a bit, agrees is pretty good, completes for the rewards, then leaves alone for 51 weeks. While that may sound harsh, it’s actually a complement: in previous editions the writing has been so strong and characters so likeable that you wanted to burn through it as fast as possible, like a TV box set. It’s similar here. Three past favourites return and are playable: original storyline focus Alex Hunter, plus sister Kim Hunter and buddy Danny Williams. The cute wrinkle is being able to toggle between the trio at any time from chapter two onwards.

Without providing spoilers – we have a FIFA 19 The Journey rewards and ending walkthrough for that – this third and final episode of Hunter’s tale ties up the story nicely, and delivers some fun unconventional elements. Think playing as Hunter’s granddad Jim on a boggy ‘70s pitch with John Motson on commentary, and piggy-in-the-middle in the Real Madrid dressing room.

Aside from Kim’s attempts to cement herself in the US national side the story focuses on Alex and Danny’s Champions League ambitions, and it’s not the only way in which the mode enters uncharted territory. Once more you won’t go back after finishing, but it matches expectations and delivers some tidy Ultimate Team rewards en route.

As for those other modes, a single element binds each: the Champions League. Both it and sister Europa League are welcome additions across the board, with Lee Dixon and Derek Rae’s commentary a refreshing break from the tiring Tyler-Smith combo, and all presentation elements accurately recreated: arch, ball, theme, deafening music after every home goal at the Bernabeu. Also available as a standalone tournament, the Champions League has understandably been a dev focus, and I can’t fault its implementation from an on-pitch perspective.

However, it’s become the latest in a long line of sticking plasters on career mode, which those diehards I mentioned earlier have wanted overhauled for years. Editing the group stages of either competition to enter your team of choice, and seeing their name drawn out of the hat TV-style in your news feed, are smart touches, but otherwise it’s unerringly similar to last year. Scouting, transfers, youth development: all identical. Still very good, it must be said, but the status quo aura will put some off purchasing.

Ultimate Team fares significantly better, which is hardly a surprise given its position as the most popular mode in sports gaming. It doesn’t get the CL commentary but does deliver cards based on that competition, and presentation tweaks of its own: bespoke pre-match intros and a neat feature where a goalscorer’s player card is superimposed on the pitch as his opponents kick off.

Pack management is expedited, too, by the option to flick up on the right stick to transfer list a card, or R2 to fast-track all into your club. After six days’ play I’d amassed 36 matches and 535 player cards, which says everything of its addictive powers.

As suspected, clan-style online mode Pro Clubs is identical to FIFA 18. There are still moments of magic in lining up alongside – and against – up to 21 other humans online (in reality you’re lucky to get 5 vs 5), but too often it’s hampered by team-mates quitting as soon as their side goes behind. I’m yet to finish a match with all human colleagues intact, and facing computerised defenders in a mode that’s supposed to be online-focused soon grows wearisome. The abiding sensation after playing it for more than two matches is a desire to quit out of FIFA and play Rocket League. Surely not the intention of the world’s biggest football game.

On the pitch, FIFA 19 succeeds in feeling comprehensively different while retaining an air of familiarity: changes made are incremental, yet there are dozens of them. When David Rutter, an ardent Pro Evo fan, took charge of the FIFA series ten years ago he proudly spoke of stripping away the marketing gimmicks and introducing more than 250 on-field changes for his first game, FIFA 09. Beyond the Champions League hype, it feels like the same approach has been adopted here, with considerable – although not total – success.

A notable reduction in game speed provides more time in midfield, while making pace merchants – of which there are mercifully few – all the more deadly. Tied directly into that is more physicality, particularly in 50/50 challenges and aerial battles; get used to being roughhoused both on and off the ball.

On paper that’s a good thing, but ’50/50’ is in fact a misnomer. Even after dropping down to Professional difficulty, the AI often comes off best regardless of attributes, and ’40/60’ more accurately describes the engine’s handling of such spur-of-the-moment clashes. I’ve tried a succession of target men up front – Carroll, Benteke, Wood, Murray – and found all shoved off the ball too easily in one-on-one situations, which is especially curious given the other physical play upgrades.

New aerial animations such as bicycle kicks, diving headers and off-the-ground backheels keep the ball ‘in play’ at all times, and heading is vastly improved – I’ve twice scored power headers into the top corner from the edge of the box. Shot variety is increased, goal kicks no longer magnetise to a striker-defender duel, the triangular icon showing your nearest team-mate (who you can switch to with L1) is a defending godsend, and AI opponents demonstrate more tactical and set-piece variation. There’s lots to love here, so long as you’re open-minded enough to avoid writing it off for not being PES.

However, a new timed shooting takes some time to get comfortable with. To action it, you hold the shoot button as normal to power up, then tap for a second time as your player strikes the ball. Elite players naturally get a bigger timing window than League Two ones, and this method has delivered me beautiful goals in Ultimate Team via loanee additions Aguero, Jesus and Mata. But it never quite feels natural with lesser players, and I’ve gone back to standard shooting when in control of my MLS and CLS squads. (The Chinese Super League is new this year, returning names like Odion Ighalo and Demba Ba to FIFA.) I still like the mechanic generally, but it’s an acquired taste best suited to those running TOTW-packed super teams.

Momentum – ‘scripting’, as critics call it – is a returning issue, with some highly dubious AI comebacks in Squad Battles. This was a major annoyance in FIFA 18, and causes you to feel like certain match outcomes are predetermined. Example: a fixture on professional difficulty, against an 81-rated team where I’m 2-0 ahead with ten minutes to play. In the dying seconds, my dominant Premier League XI suddenly becomes incapable of stringing together more than two passes, and the AI scores two quickfire goals to send the match to extra-time. Suddenly, my team turns amazing again, finally scoring in the 113th minute… and then atrocious following the kick-off, once more conceding to draw 3-3. Inevitably I lose on penalties. Perhaps this is just sports psychology – but it happens too often to be called a coincidence.

All of which renders FIFA 19 difficult to score. Physicality quibbles aside, I love the on-pitch feel this year, and that coupled with Ultimate Team enhancements and the sheer wealth of stuff to do – options such as the hilarious no-rules mode make even exhibition matches infinitely playable – add up to a five-star game as regards my personal tastes. But for the fervid career mode or Pro Clubs aficionado it isn’t a five-star game. 4.5 stars it has to be, then, with casuals as certain to love it as cynics are to go studs-in on its kneecaps. Plus ça change…

The Champions League expands FIFA’s exhaustive selection of licences – but thanks to lessons learned last year there’s plenty to love out on the pitch, too.