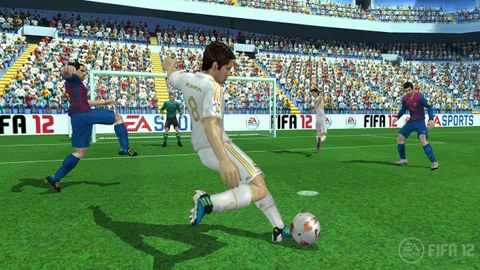 When EA originally showcased their all-new defensive system in FIFA 12, I couldn’t see any problem with the act of stopping an opponent dribbling towards me. A tap of *circle* sticks a leg out to prod the ball away instead of the player doing it automatically. Simple. Even though they removed traditional 2nd Player Press – where an AI team-mate would sprint in to tackle for the ball like a heat-seeking missile – it still felt easy enough to defend. In hindsight, there was one thing clouding my positive assessment of the new defending – the human factor.

Every game I played previous to writing this review was against another person. A fallible human being like myself that was finding their feet with the game at the same pace I was. Playing FIFA 12 against the AI on anything higher than semi-pro difficulty setting is a real slog for seasoned players, let alone newcomers. And as a result this is the first FIFA in memory where it isn’t instantly a pick up ‘n’ play classic.

Above: The animations and player likenesses are bloody brilliant this season

Defending is now a web of multiple button presses to track, fast track, poke tackle, slide and ask another player to help out. Even with the initial tutorial, it still feels slightly over-complicated and as the AI attacks with ruthless efficiency, one missed button press will see the opposition glide through your defence as if they’re not there and slot a goal home. I find this out with Man United as I’m thumped 4-0 by West Brom away.

Because the game knows exactly what move you’re going to make in a nanosecond, it uses this knowledge to dance through your side with ease. It wouldn’t be so bad if, you know, you could do the same when dribbling but, hey look, the defenders know exactly where you’re going before you’ve had chance to touch the left stick.

Above: The new Player Impact Engine means tussles on the ball are more realistic

The evolutionary tweaks are necessary to keep FIFA on top of its game and for that I applaud EA’s efforts. After all, you don’t just want a yearly update of something that could be delivered via DLC, right? Right. But in their quest to introduce a new system the AI balancing to accommodate the defensive innovations has been left in the changing rooms.

To make matters worse, if you drop the difficulty to semi-pro or below you’re unable to post your statistics to the online leaderboards, which creates an elitism amongst FIFA 12 players, which goes against the grain of the ‘everyone in’ mantra that the game is known for. Oh, and semi-pro is too easy. It sounds like I’m being difficult but as a man who has put an embarrassing amount of hours into football games, this is the first time I’ve been stumped. The remedy is to simply train like a youth team player until you’re used to the on-field action. Or switch off the new defensive system altogether. Wait, what?

Yup, that’s right; FIFA 12 has an option to switch back to FIFA 11’s defensive system, which reintroduces said heat-seeking missile players. It can make playing against the computer slightly easier but the point of new tweaks is to learn and master them so that you evolve as the game does. Plus, these new features should be universal to all FIFA 12's modes - online and offline - but they're not. This so-called legacy defending can't be taken into the online multiplayer side of things, so if there's little point falling back on the old school defending offline as you'll eventually have to learn it online. Argh! Although there is a very logical reason for this.